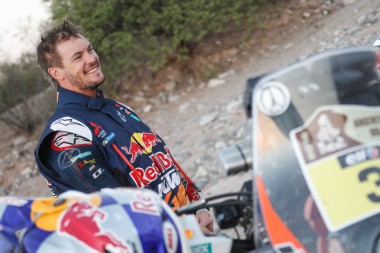 Red Bull KTM factory rider Toby Price on Tuesday took yet another stage win at the Dakar Rally 2016 and now also has a commanding lead in the overall standings as the race heads for the finish in Argentina’s Rosario on Saturday.

The Australian rider was one of 12 riders who covered the whole distance before organizers called a halt to the stage at the second official checkpoint, citing extreme heat as the reason. Race officials later adjusted results after they reviewed the situation concerning the decision to shorten it. Tuesday’s stage was the first half of a second marathon stage where riders stayed overnight in an isolated bivouac with not contact and no assistance from their teams.

American rider Ricky Brabec was awarded second place in the stage 12 minutes 29 behind the winner. Price’s teammate Antoine Meo was third. Slovak KTM rider Stefan Svitko moved to fourth place after a one-minute penalty. Cutting the stage short also changed the character of the race and in effect reinstated Price’s main opponent, Paolo Goncalves. He had suffered mechanical problems but as this happened after the deemed final race distance he stays in the competition. Although organizers cut the original timed special distance, riders agreed that it had been a very tough stage.

Price admitted that he had made some small mistakes around the 100km mark but eventually located the waypoint and bot back on track. “Other than that, we’ve had a fairly decent day, a fairly solid day. It was just good that we didn’t get lost. It was definitely tricky navigation today. I still feel solid, I still feel really good. It’s definitely hot right now at the moment, but we’ll suit up again, get going, get some air flowing and it shouldn’t be too bad. It’s been a good day.” In fact Price had a significant lead when the stage was shortened and covered the whole distance. “It’s job done today, but everyone’s got lucky since we’ve stopped at CP1 and CP2. The bike seems really good, really strong and still going really well. The mechanics have done a really good job over the lead-up to the race and during the event. I think we’re cruising along alright.”

Antoine Meo of France also underlined that it had been a hard day, including taking a tumble after getting a piece of tree in the wheel. “I was passing Farres, but that (the crash) set me back again. In the second part, I did very well on the navigation, so I was very happy. I passed Farres and Helder (Rodrigues). I was just behind Benavides, so it was quite good. But they stopped the stage early because it was very hot. I’m still in one piece and the bike is okay, so I’m hoping for better tomorrow. I think in the Dakar you also need to be lucky. At the moment, I’m lucky. The bike is working well and still in one piece so that’s important”.

Speaking later Alex Doringer, KTM’s team manager said: “Today the temperature was very hot. The race started very well for Toby because he had a very good pace and a very good rhythm. He was also awesome with the navigation so he finished with a big gap in front of Svitko, but finally the conclusion was that they had to stop the race after CP2 because many of the riders were dehydrated and the helicopter could not manage the race. The decision was to cut the race at CP2 for some of the riders and take into account the final results of those that finished the race. All riders who finished at CP2 were given the time of the slowest of these 12 riders.

Tuesday’s stage was always going to be a difficult one, and probably the most physically strenuous given that there was hard off-piste track dotted with vegetation. Navigation was tougher and the extreme heat was also pre-programmed. Because the stage was prematurely stopped, final times may be adjusted overnight.

KTM factory rider Laia Sanz of Spain rose to the occasion to finish in 14th position in the stage but it was another difficult day for Red Bull KTM factory teammate Jordi Viladoms, who is still battling to recover from a fever in the first week. Viladoms is presently 29th overall.

There will be a special start to Wednesday’s stage with the ten fastest riders and cars beginning the stage from the CP 2 of Tuesday’s stage. They have a difficult ride in the notorious Fiambalá dunes and this stage has been considered as one of the most critical and decisive sections of this year’s race. All being well, this could also be the right territory for Price, who at home in Australia, has a formidable record of wins in the country’s desert classics.

The second marathon stage of the 2016 Rally Dakar showed just how tough the extreme conditions of the race are. Race organizers...
Copyright 2011-2016 Rallyraid.net - RISE Network. All Right Reserved.
Back to top