Robby Gordon in his quest to become the first American to win the Dakar Rally, overcame two days of horrible course conditions to post his first top ten finish of the 38 Annual Dakar Rally on Wednesday. 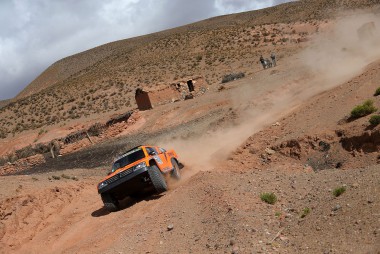 Starting in the 19 position Robby Gordon broke out to a blistering pace working his way up to the 13 position by km 80 just 3 minutes and 47 seconds behind leader Frenchman Stephan Peterhansel. Pushing the HST Gordini supercar and his Toyo Tires to its maximum capacity at altitudes of 3,500 m (11,483 ft), Gordon and navigator Kellon Walch would gain time on the leaders in the sandy and rocky terrain, but would also loose time in certain portions that were noted as tricky navigational areas.

Gordon would go on to put a consistent run together at the end of the stage to finish in 3 hours, 51 minutes and 16 seconds, just 8 minutes and 34 seconds behind the time set by stage winner Peterhansel who finished in a time of 3 hours, 42 minutes and 42 seconds. The time was good enough to record Gordon’s first top-ten finish of the 2016 Rally, setting up a 10 place starting position for Stage 5 on Thursday in a special where the Gordini should be able to gain valuable time on the leaders and content for the stage win.

Team SPEED teammate Sheldon Creed would start stage 4 in the 28th position, and really showed positive driving throughout the day advancing all the way to the eighth position at one time. After being accessed a 10-minute penalty for speeding during one of the transfer sections, Creed would finish the fourth stage in a time of 4 hours, 4 minutes, and 20 seconds in the 26 position, just 21 minutes and 38 seconds behind the winner.

Thursday’s fifth stage (642 km/399 mi) will take drivers from San Salvador De Jujuy, Argentina to Uyuni, Bolivia for the second portion of the marathon stage. With altitudes increasing to around 4,600 m (15,092 feet) the fatigue of the Dakar will start to kick in for the drivers, navigators, and race vehicles. Generally in Dakar Rally history the fifth stage starts to separate the contenders from the rest of the pack. Navigators; Kellon Walch and Jonah Street will be on extremely high alert as Gordon and Creed cannot sacrifice loosing any more valuable time to the leaders. 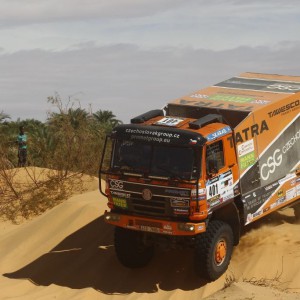 The philosophy of the AFRICA ECO RACE is to create loops so that the assistance can get some time to catch their breaths....
Copyright 2011-2016 Rallyraid.net - RISE Network. All Right Reserved.
Back to top