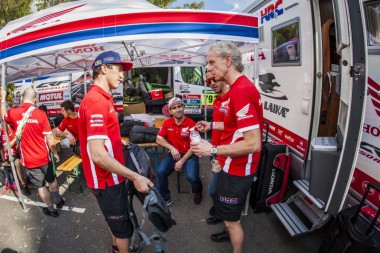 With the technical and administrative tests completed the team can now look forward to a New Year’s Day morning of final preparations before the event’s curtain-raiser takes place on the January 2.

The Dakar Rally is all set to begin. Team HRC too. The riders, mechanics, technical crew and the Honda CRF450 RALLY bikes have made it through the official race scrutineering and the action can now begin. It took a whole morning to get HRC riders Joan Barreda, Paulo Gonçalves, Michael Metge, Paolo Ceci and Ricky Brabec through the obligatory technical and administrative checks before getting the official go-ahead to embark on the great rally odyssey. 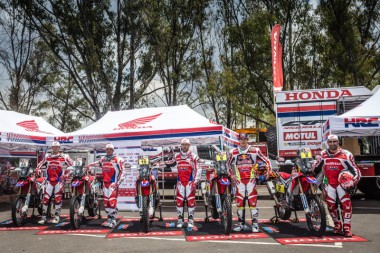 Ahead lie two weeks of tough competition. Competitors can expect a looping 9000 kilometre circuit that starts and finishes in Rosario, Argentina, taking in Bolivia on the way, plus the 300 kilometres of prologue that gets the show underway on 2nd January. Before we know the winner of the Dakar 2016 in two weeks time, the 143 riders in the bike section will have been forced to endure a 4,684 kilometre test of speed, skill, riding dexterity and, above all, navigational prowess.

The prologue stage gets the event off and running from Buenos Aires’ Tecnopolis complex with a special stage against the clock in the Baradero area. The whole race route is, of course, already mapped out and scheduled, but heavy rain has recently wreaked havoc in the northern region of Argentina. This could lead race authorities to make some amendments to the planned route.

The Portuguese pilot Elisabete Jacinto maintains the fourth place of the truck category after having completed the third...
Copyright 2011-2016 Rallyraid.net - RISE Network. All Right Reserved.
Back to top