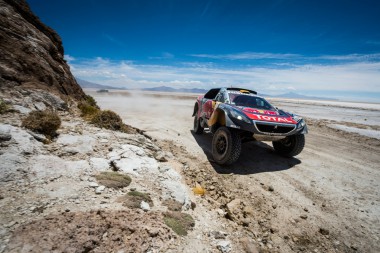 For the fifth time, Team Peugeot Total monopolised the top two places on a leg. Today’s one-two was led by Stéphane Peterhansel and Jean-Paul Cottret, ahead of Carlos Sainz and Lucas Cruz on the longest stage of the 2016 Dakar, which totalled 546 kilometres.
• The PEUGEOT drivers delivered another fantastic battle. Stéphane Peterhansel, Sebastien Loeb and Carlos Sainz took the lead over from each other with some very small gaps.

• Thanks to this second stage win, the crew of Peterhansel and Cottret take the lead overall, with three PEUGEOT 2008 DKRs in the top three. The gap to their rivals has increased with fourth place now 15 minutes behind.

• Sébastien Loeb and Daniel Elena had two problems, two punctures and a stuck throttle. They ended up losing eight minutes and are currently runners-up in the overall classification.

• After the problems they encountered yesterday, Cyril Despres and David Castera were able to continue their race today. They started 16th and put in an impressive fightback to set the 11th-fastest time on the stage.

“It was a long stage and it’s always hard to stay concentrated over such a length of time. But it went well: we didn’t encounter any navigation problems or punctures, so everything is fine. It’s still mainly a clear track to follow, there’s not much real off-road stuff. Our car is still very new and we’re certainly not out of danger from technical problems. It happened to Cyril yesterday, and it could happen to any other of the three of us as well.”

“It was a good stage. Our car worked well, with no problems, but we had to drive for 200 kilometres in the dust of Sébastien’s car. It was tricky but everything else went well. This was a very long stage but luckily it wasn’t particularly hot. Obviously there are the effects of altitude here, but personally I didn’t have any problems with that.”

“We had a puncture at kilometre 100 and then our accelerator pedal stuck open. We had to slow down using the circuit breaker! Afterwards I hit a rock, which meant that we had to change a wheel. It was a tricky day, but that’s how it is sometimes. We still have three Peugeots at the front, so the team is dominating. Generally it’s gone well up until today, where we lost out quite notably. So everything is reset at zero now and we have to start again. But the feeling is good and the car is working well. We don’t have any particular problems.”

“When we were crossing the lake at Uyuni at 3700 metres in altitude we hit a rut that ended up breaking a rim (kil 45). We didn’t notice immediately. We lost pressure and changed the wheel. For the rest it went well and we hope to be on the right track tomorrow”

A long and hard day 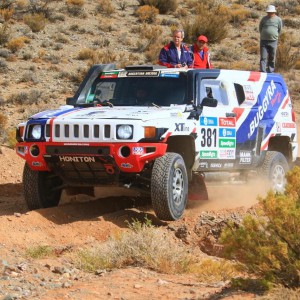 A long and hard day

The crew of Buggyra Ultimate Dakar had a long and hard day in the 6th stage of the 2016 Dakar Rally. After their problems,...
Copyright 2011-2016 Rallyraid.net - RISE Network. All Right Reserved.
Back to top