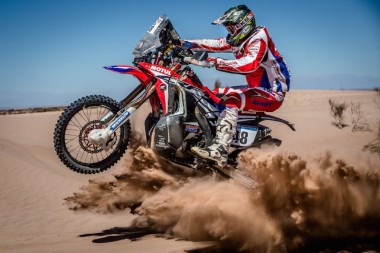 The tenth outing so far in the 2016 Rally Dakar, for the umpteenth time, fell victim to extreme weather. The 278 scheduled kilometres of timed special stage that connect the Belén bivouac with La Rioja were cut short, 30 kilometres shy of the final finish-line. Again a swollen river, too deep to cross, was enough for race authorities to stop the course prematurely.

At the end of yesterday’s drama-filled escapade, Paulo Gonçalves, alongside Team HRC sidekicks Michael Metge, Ricky Brabec and Paolo Ceci, set to work on the Honda CRF450 RALLY, whose radiator had been pierced by a log. Once substituted, they were able to see that the piston, previously believed to be damaged, was in fact sound and some adjustments to the bike’s compression were all that were necessary to get the machine road-worthy.

After the cancellation yesterday of the latter part of stage nine, Goncalves started out today from thirteenth position with an atypical start that saw cars, trucks and bikes head off together in groups. The Portuguese ace fought his way up the field before posting a final fourth position some six minutes off the day’s winner. Gonçalves thus consolidates his overall third place.

Ricky Brabec continues to take to his debut Dakar like a duck to water. After the second place finish in yesterday’s stage, the American today picked up an eighth place, 13’47” behind the stage victor. Brabec also lies in eighth in the general standings. Team-mate Paolo Ceci had a trouble-free day, nevertheless, Michael Metge was unable to take the start this morning. 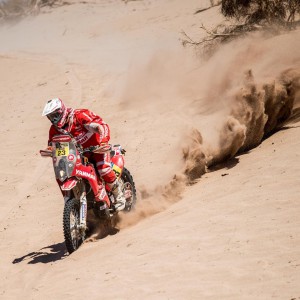 Uncertainty is also a common Dakar theme, at least in this edition. To the rider’s suffering, facing the toughest race...
Copyright 2011-2016 Rallyraid.net - RISE Network. All Right Reserved.
Back to top