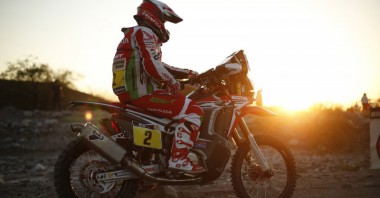 The second marathon stage of the 2016 Rally Dakar showed just how tough the extreme conditions of the race are. Race organizers today decided to cut short the timed special halfway through.

The ninth stage held in Fiambalá today was a wretched one. A tough day had been expected and a tough day it turned out to be with soaring temperatures forcing officials to cancel finally the stage at CP2. Extreme weather continues to pound the Dakar, with a hellish battle in the Fiambalá dunes at 45º C and more. Indeed the ASO deemed the sweltering conditions unfit for racing and moved the finish forward to Check Point 2. Riders were sent directly to the marathon bivouac where the bikes are not permitted to receive any type of mechanical assistance.

Paulo Gonçalves had a day of drama, running into serious mechanical problems caused by a shrub branch penetrating the radiator, which in turn led to a leakage. Several kilometres later his machine – now without cooling – ground to a halt. Team-mate Paolo Ceci towed him to the bivouac where they will attempt to repair the damage done to the engine.

Neither Paulo Gonçalves, nor Team HRC, wish to throw the towel in this Dakar 2016 and team-mates Michael Metge, Ricky Brabec and Paolo Ceci will do everything in their power to help the Portuguese rider salvage the best possible result from what is left of the race. Today is not possible the Team mechanical assistance because is Marathon stage.

Ricky Brabec rode a notable special, finishing with the day’s fifth best time at CP2, where the race prematurely ended. Is his best partial result in his first participation in the Dakar. Michael Metge, who arrived back at the bivouac yesterday night after enduring some electrical issues, had the bike checked over by the mechanics who were able to resolve the problem, allowing the Frenchman to start again this morning. Both Metge and team-mate Paolo Ceci (Italy) made it through to CP2. 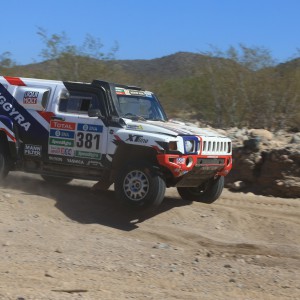 Stage 9, a loop stage around Belen, Argentina, was the second one in the dunes. The originally 285 km long special was shortened...
Copyright 2011-2016 Rallyraid.net - RISE Network. All Right Reserved.
Back to top