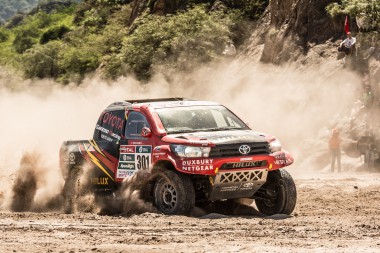 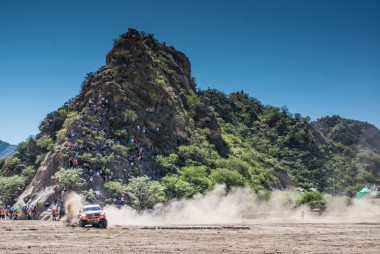 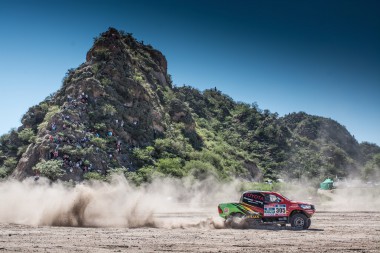 Extremely hot temperatures, reaching nearly 50 degrees Celsius, plagued Stage 9 of the 2016 Dakar Rally. As a result, the stage was shortened to just 90 km for the cars and trucks, while the motorcycles completed the full 285 km-long route. For Toyota Gazoo Racing SA, the stage again brought mixed results, with Dakar veterans Giniel de Villiers and navigator Dirk von Zitzewitz recording the best Toyota result of the day.

Stage 9, which was planned as a 285 km-long loop over many dunes near the Argentine town of Belén, was clearly much more suited to the V8-powered Toyota Hilux race vehicles. Both De Villiers and Leeroy Poulter, partnered with navigator Rob Howie, got off to a flying start. As a matter of fact, Poulter was just two seconds off the leader at the first waypoint.

“Unfortunately things didn’t quite go to plan from that point,” said Poulter after reaching the bivouac at the end of the shortened stage. “We hesitated for a moment while entering a tricky canyon. There was Peugeot bodywork strewn around, and we were overly cautious as a result.”

Poulter/Howie (#319) lost some time at the canyon, before picking their way cautiously along the route. They also suffered two punctures on Stage 9, finishing in 11th place on the stage, just over sixteen minutes behind the stage winner, Carlos Sainz (Peugeot). As a consequence, Poulter/Howie moved down to seventh in the overall standings, less than two minutes ahead of teammates Yazeed al Rajhi and navigator Timo Gottschalk (#305).

Al Rajhi/Gottschalk finished 8th on Stage 9, losing 09:38 to Sainz. The pair started strong, but struggled to locate the first waypoint, and lost the best part of thirteen minutes early in the stage. They fought back, however, to restrict the damage and are now in 6th place overall.

The drive of the day, however, belonged to De Villiers/Von Zitzewitz (#301), who had a bad day on Stage 8. The pair bounced back on Stage 9, posting the 4th-fastest time of the day, just 00:38 behind Sainz, despite suffering a puncture mid-stage. This sees them in 5th place in the overall standings, with just four stages to go.

“The terrain on stage 9 was extremely tough,” said Team Principal Glyn Hall from Belén. “But we are pleased that all three our cars ran faultlessly, and we are proud that the Toyota Hilux has proven so reliable.”

With that said, all three cars were fitted with new drive shafts after Stage 9, in preparation for what could arguably be the deciding stage on this year’s race. Stage 10 will see the crews race through the famous dunes of Fiambalá, over a distance of 278 km. This will be followed by a long liaison of more than 400 km, before the Dakar arrives in the city of La Rioja.

Four more stages are left, with the Dakar drawing to a close in the Argentine city of Rosario on Saturday 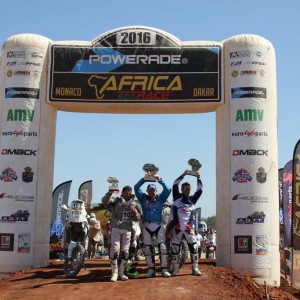 Traditionally the final stage at the Lac Rose does not affect the overall ranking of the AFRICA ECO RACE, as it is frozen...
Copyright 2011-2016 Rallyraid.net - RISE Network. All Right Reserved.
Back to top