Xtreme Plus: Belen – Belen a stage from hell! 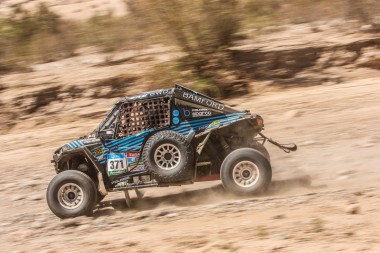 Today, competitors experienced the real Dakar during this loop Belen – Belen. The journey was mostly off-road, in small dunes with some vegetation, then harder terrain and a riverbank. This special stage was also announced to be challenging navigation wise.

This morning, the sky was clear and the thermometer quickly climbed to the red zone… It was so red that the organizer stopped the special stage at CP2 for the bikes, cars and truck. Tomorrow, the Super Special starts with the ten best times of each class combined. At the arrival of the bivouac, all crews were exhausted and had to face the sandstorm. Most of them tried to escape to get some rest at the hotels.

At the time of this press release, three out of four Polaris crews completed the special stage. Only Eugenio Amos/Rafael Tornabell N.371 is still in the tracks with an electrical problem to be solved.

Michele Cinotto/Mauricio Dominella N.389 (38 in 5h17’11):“When we arrived to CP2, they signaled that the special stage had finished, so I hugged the guys at the CP. It was a journey for survivors, the temperature was terrible and all cars would heat up. We had to stop several times to cool it down. Then, we had a puncture, and with this weather, it was impossible to get the jack to come up so we repaired avec wicks twice. We also had a battery problem and the RZR stopped twice. In a canyon, a truck rolled over in front of us, so we just had time to climb and then, we couldn´t find the way to go back down. It was fun!”

Mao Rujin/Ka Chun Yu N.394 (47 in 5h40’21): The Chinese team has managed this difficult stage with only one puncture. Mao and Ka arrived to the bivouac in the 47th place. A job well-done considering the difficulties of the day!

Leandro Torres/Roldan Lourival N.367(54es en06h38’32): “I can´t do this anymore, I am so tired… we had to work with our shovels for an hour, putting plates and the jack… It was extremely difficult with the heat!” 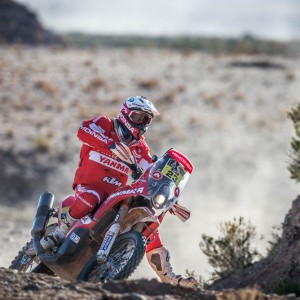 The spirit of Dakar, for anyone who has followed the rally for the last decades, is this: huge sand dunes, sweltering heat...
Copyright 2011-2016 Rallyraid.net - RISE Network. All Right Reserved.
Back to top