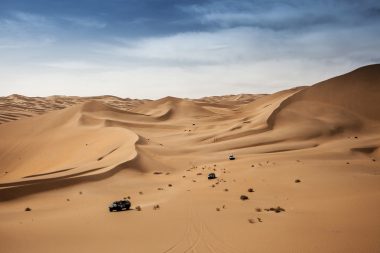 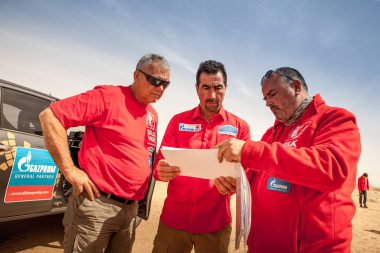 Reconnaissance for edition six of the Silk Way Rally has crossed from Kazakhstan to China with the finish line still far on the horizon. The multi-national Reccie Team continues to plot the course that rally-raiders from around the world are awaiting with bated breathe.

The three-week long second leg of the reccie began earlier this month in the former Kazakhstan capital city of Almaty. The six-car Reccie Team with rally-raid specialists representing Russia, China and France was back at work heading to the Kazakh-China border crossing at Khorgas in the Lli valley river basin, which centuries ago was a vital artery of the Ancient Silk Route, and today is a thriving logistic centre between the two countries. Not as much publicized but just as important is a group of six vehicles, which while the competition route is being sought, is also exploring this vast terrain to determine the assistance route. Bivouac locations, medical and meal services and event suppliers are key elements that must also be planned out in detail as fine as the sands of the Gobi itself.

Among the members of the crew is 2006 Dakar champion Luc Alphand. Before the Frenchman made an international name for himself on four-wheels, he was a winter sports superstar following his world alpine title in 1997. Who better than Luc to tell us what awaits the competitors: “What we’ve seen during the reconnaissance is simply amazing”, beamed Alphand. “The wide-open spaces are amazing. I was surprised by how huge some of the ergs were. 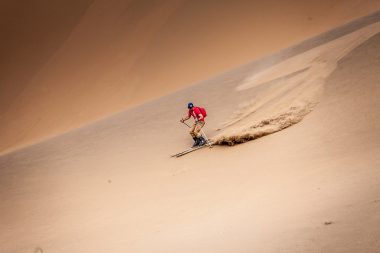 The dunes are incredible and the scenery is so beautiful. The competitors will enjoy everything the Silk Way Rally has to offer. This rally has all the different terrains that you could want! This is much more than a sporting event, this is a true adventure!” While the competitors will be in for two long and rough weeks of competition, Alphand believes it is well within the skill levels of all the participants. Lucho even slapped on a pair of Rossignols to prove his point «Yes it will be difficult but not impossible; all competitors can do this race, look, even with my skis I managed to race down the dunes.” (laugh)

Pictures alone cannot fully describe the splendours of the regions with the endless plateaus, canyons, steppes and of course dunes, which will have those of us with long memories, thinking back to the days of the African raids. 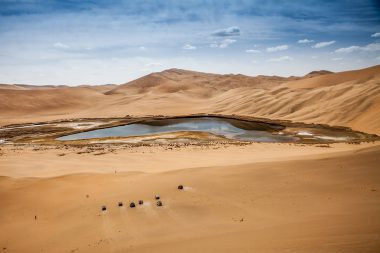 The route continues south into the very heart of this mysterious country of contrasts and the landscapes continue to impress. There is nothing better than an epic raid to promote regions that for some seem to be inaccessible. In the very attentive discussions with Chinese authorities, a common willingness made it easier to offer teams and drivers coming from around the world a spectacular route to compete on and breath-taking images to television viewers. 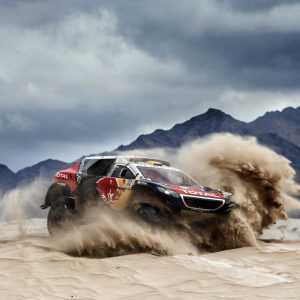 Buoyed by its most recent Dakar victory, Team Peugeot Total is preparing to embark upon a new challenge – that of taming...
Copyright 2011-2016 Rallyraid.net - RISE Network. All Right Reserved.
Back to top