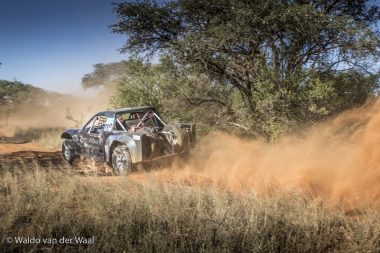 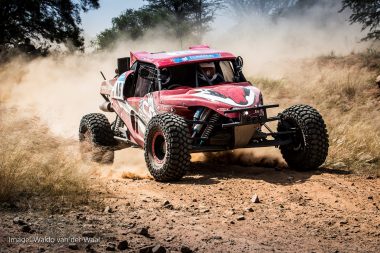 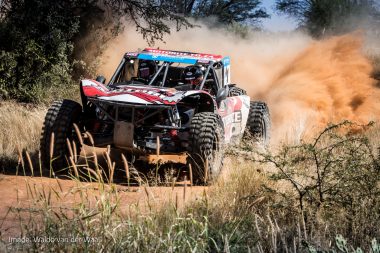 Crews will be venturing into the unknown on the Vredefort Super Sprint, the second round of the Donaldson Cross Country Motor Racing Championship, in the Free State on May 7.

The one day event is a new innovation on the Donaldson calendar and will be run over two 100 kilometre laps with no qualifying event to determine grid positions. The start order will be via a national seeding list and, on a flat and compact route, the action promises to be fast and furious.

While teams will be venturing into unchartered waters, there are two Special Vehicle category crews who will go into the event carrying most of the smart money. Reigning South African champions Evan Hutchison and Danie Stassen (Motorite BAT Viper) and former champions Quintin and Kallie Sullwald (Motorite BAT Venom) have proven pedigrees when it comes to winning race and national titles.

It is at events like this one when experience and the ability to adapt to circumstances come to the fore. In this respect Hutchison/Stassen and the Sullwalds, with Quintin recently taking marriage vows, are richly served.

The format of the event does not leave much room for complicated tactical approaches. It will be flat out racing from the very start, and it is here that a couple of other crews could trouble the Motorite team-mates.

Jimmy Zahos/Zaheer Bodhanya (Cobalt Racing Stryker) and Sarel van Biljon/Philip Herselman (Atlas Copco BAT) have in the past shown good pace with reliability the problem for both teams. They will relish a flat out blast without having to nurse machinery over longer distances.

A first appearance of the season for Dakar top 20 finishers Mark Corbett and Juan Mohr (Century Racing CR5) could also spell trouble for the two Motorite crews. Corbett and Mohr also have loads of experience and will be full of expectation and confidence.

Marius and Jolinda Fourie (PHB BAT), back in the Special Vehicle category after a season or two in Production Vehicles, could also find the sprint format to their liking. Australian Dave McShane, partnered by Leander Pienaar in the Fox Racing Porter, falls into the same category, and suddenly there are three or four crews who could seriously challenge Hutchison/Stassen and the Sullwalds.

After a podium finish on the first event Keith Makenete, partnered this time out by Taelo Mochebelele in a BAT, will want a repeat performance and Coetzee Labuscagne and daughter Sandra, fired up by her exploits on the Sealine Cross Country Rally in Qatar, will also be high on confidence. Although this is a sprint event the more cautious approach could reap rewards in terms of good points hauls, and the likes of Stefan van Pletzen/Jaco Pieterse (Chenowth) and Lourens/Carien Booysen (BAT) would also like to build on steady if unspectacular starts to the season.

Naeem Moosajee and Rayhaan Bodhanya will again be out in the Tyre Rack Jimco while Ntaote Bereng swaps co-driving for driving and will be out in an Aceco with another newcomer in Makara Matekane, with Andre Fourie/Hendrik Pienaar (PHB BAT) another crew who could relish the shorter sprint distance.

The Class P situation has an interesting feel about it. The opening event, the RFS Endurance Race in Vryburg, produced something of a surprise with newcomers Willem du Toit and Bertus Goussard (CR-T) eking out the narrowest of wins over reigning champions John Thomson and Maurice Zermatten in a Zarco.

In recent seasons the Thomson/Zermatten success rate has largely been built on reliability and grinding out results. The challenge provided by du Toit/Goussard is a wake-up call for the champions, and it is going to be interesting to see how they react in Vredefort.

There is, however, added interest in the debut of Dakar Rally quad star Brian Baragwanath in a Century Racing CR-T.  Baragwanath, on the podium at the Dakar this year, will be joined by Marc de Chalain who makes a return after a lengthy lay-off, with the pair linking up with Century Racing team-mates Guy Henley and Martin Hermida in another CR-T.

The opening event provided veteran Nic Goslar and Andrew Massey (SA Clinics Zarco), Grant Watkins/Paul Mare (BAT) and John Telford/Victor Ntsekhe (Calcamite Hellcat) with steady starts to their campaigns. Much of the same can be expected from the trio this time around with Andrew Makenete and Reginald Mothibeli also in the mix in a Zarco Magnum.

Race headquarters, the start/finish and designated service park will all be based at the farm Witwal on the outskirts of Vredefort. Public entry to these areas and designated spectator points along the route is free of charge.

The first lap of the race will start at 09:45 and the second loop at 13:30 During the break between races there will be a host of public entertainment including meeting the drivers/navigators and Dakar Rally heroes at poster signing sessions, spot prizes and a cross country quiz and tasty treat will help turn the event into a gala outing. The event offers the perfect family outing with national championship motor racing adding a touch of drama and excitement. 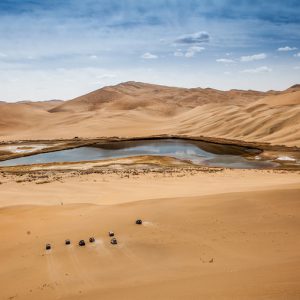 Reconnaissance for edition six of the Silk Way Rally has crossed from Kazakhstan to China with the finish line still far on the horizon....
Copyright 2011-2016 Rallyraid.net - RISE Network. All Right Reserved.
Back to top