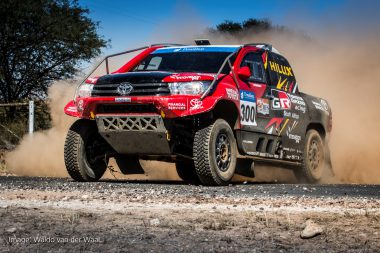 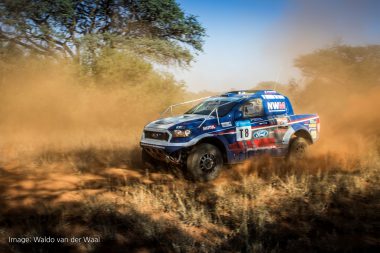 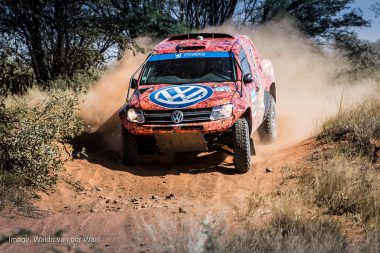 If you fancy a flutter now and again you might consider placing a few shekels on the Toyota Gazoo Racing SA pair of Leeroy Poulter/Rob Howie and Anthony Taylor/Dennis Murphy continuing on their winning way at the Vredefort Super Sprint, round two of the Donaldson Cross Country Motor Racing Championship, in the Free State on Saturday, May 7.

However, the odds offered by bookies would be prohibitive. The factory Toyota team went through last season unbeaten, and a one/two for Poulter/Howie and Taylor/Murphy at the RFS Endurance Race has ominous overtones for the rest of this season.

The other players in the new FIA Class, which allows teams to run cars to FIA Group T1 specifications applying to the FIA Cross Country Rally World Cup and the Dakar Rally, are a trio of Red-Lined Motorsport Nissan Navaras. Jurgen and Daniel Schroder and Sean Reitz, partnered by newcomer Avril de Villiers, are fresh from Dakar Rally appearances with the third car in the hands of team principal Terence Marsh and another newcomer in Dirk Hefer.

They may have an advantage in terms of numbers, but the Red-Lined teams will have to come up with something special if they are to trouble the Toyota pair. The Class T brigade – now running with solid axle rear suspension and commercially available tyres – simply do not have the firepower to trouble FIA Class runners.

Given the current status quo, however, it is Class T that will provide much of the interest. The category has a nice mix of youth and experience and embraces entries from BMW, Ford, Nissan, Toyota and Volkswagen.

With the race a one day affair to be run over two 100 kilometre laps with no qualifying event, the Vredefort outing is an innovative newcomer to the Donaldson calendar.  The start order will be as per the national seeding list, and the race provides a little variety to go with the combination of sprint and endurance races and a lone marathon event that make up the rest of the calendar.

On the Class T front North West youngsters Jason Venter and Vince van Allemann (4×4 Mega World Toyota Hilux) got their season off to a flying start with a third overall that gives them an early class lead. The pair have rapidly matured but there is a long list of challengers.

The experienced Johan van Staden/Mike Lawrenson (Red-Lined Nissan Navara) and Chris Visser/Ward Huxtable (Neil Woolridge Motorsport/Ford Performance Ranger) also showed good early form, and have the know how to deal with the challenges a short sprint race will offer. Given good reliability and barring unforeseen circumstances one would expect both crews to be strong championship challengers this time around.

The Vryburg outing also produced a solid performance from Hennie de Klerk and youngster Adriaan Roets in the Treasury One BMW X3. Their problem, one which also confronts Johan and Werner Horn (Malalane Toyota Hilux) and Luke Botha/Andre Vermeulen (Red-Lined Nissan Navara), will be to maintain the early momentum.

Gareth Woolridge and Boyd Dreyer (Neil Woolridge Motorsport/Ford Performance Ranger) face a directly opposite scenario. The pair were the ‘finds’ of last season, but a disappointing start to their campaign has left them under early pressure with the need to bounce back with a good performance to restore confidence.

The two VW Amaroks – the RFS entry of Christiaan du Plooy and Henk Janse van Vuuren and the Atlas Copco vehicle in the hands of Gary Bertholdt and champion rally navigator Pierre Arries – are welcome additions to the cross country fold. There is plenty of potential in terms of crews and machinery, but both du Plooy/van Vuuren and Bertholdt/Arries will be aware of the need to turn potential into meaningful results.

The Class S points cupboard was left bare after the RFS Vryburg outing. There were no finishers and everyone starts with a clean slate in Vryburg.

Heine Strumpher/Henri Hugo (4×4 Mega World Toyota Hilux) just missed out on last year’s championship, while a little motorsport history was made in Vryburg with a third generation of the Visser family making his national debut. Former South African champion Jannie Visser was partnered by his nephew, Chris Visser junior, with the pair again out in a Toyota Hilux and hoping for a finish this time out.

The Graven Motorsport Toyota Hilux pair of Otto Graven/Bobby Brewis and Ronald Graven/Lohan Faber will make a second national appearance, and will also be looking for their first points of the season.

Race headquarters, the start/finish and designated service park for the Vredefort 200 will all be based at the farm Witwal on the outskirts of Vredefort. Public entry to these areas and designated spectator points along the route is free of charge.

The first loop will start at 09:45 and the second loop at 13:30. During the interval between races there will be a host of public entertainment including meeting the drivers/navigators and SA’s Dakar Rally heroes at poster signing sessions, spot prizes and a cross country quiz will help turn the event into a gala outing. The event offers the perfect family outing with national championship motor racing adding a touch of drama and excitement. 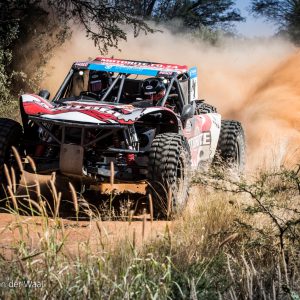 Crews will be venturing into the unknown on the Vredefort Super Sprint, the second round of the Donaldson Cross Country Motor...
Copyright 2011-2016 Rallyraid.net - RISE Network. All Right Reserved.
Back to top