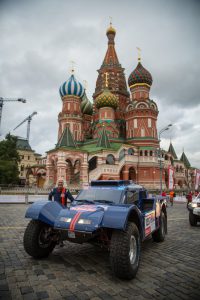 Tonight, Eric Mozas and Rafael Tornabell took the official start of the Silk Way Rally 2016 at the mythical Red Square, in front of an enormous crowd that came to watch the motorsport event in spite of the threatening weather. Back at the assistance located at the Lyzhkini Stadium, Eric and Rafael spent a short night at the motorhome… they had to get up at 3 am to take the 850 road to Kazan for the first leg of the race!

Due to several traffic jams along the road, competitors arrived later than planned. The organizer delayed the start of the Super Special until 6 pm, one hour after the original schedule.

ERIC MOZAS/RAFAEL TORNABELL #135 – 24th in 1’54 (provisional classification): “We were able to transport the buggy on the trailer, explains Eric Mozas, but 200 km before Kazan, I took the wheel with Rafael to break-in the engine and get used to the car.

After our arrival to Kazan, we had 2 km of road connection to take the start of a 2 km prime. The selective section was run on soft sand. It was short but fun, the engine of the buggy SMG 2WD is absolutely great and goes well in this type of terrain.” 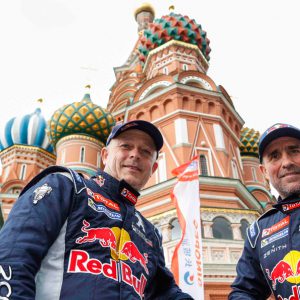 The administrative checks and scrutineering are now in the rear-view mirror as edition six of the Silk Way Rally received...
Copyright 2011-2016 Rallyraid.net - RISE Network. All Right Reserved.
Back to top