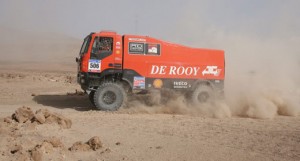 In order to give itself the utmost chance of competing with the Kamaz trucks, both on the Dakar and the next Silk Way Rally, team De Rooy has called upon Hans Stacey, winner of the Dakar in 2007, who represents a first-class reinforcement for the team.

The general consensus was that Jan De Rooy had taken a back seat from the rally business, but now he is back with a bang. Not behind the wheel of a truck, but as manager of his own team. “Battling for victory is possible with a full team, but not with only one driver. We have excellent trucks, so we need excellent drivers”, explains the team’s patriarch who won the Dakar in 1987. “On his own, Gerard can’t compete with Kamaz and Tatra, but with Hans they will be able to do it, so that’s why I wanted him to join us”, points out Jan De Rooy.

Together, Gerard De Rooy and Hans Stacey boast four podiums on the Dakar, and two others on the Dakar Series. The pair’s competitiveness is therefore guaranteed, especially since Stacey is the last driver to have beaten the Kamaz trucks!

This coming together of former rivals, given the major successes Stacey enjoyed in the ranks of the MAN team, came about naturally, since Jan De Rooy, his new boss, is also his uncle. “I think it’s also important to know each other very well to be able to produce good results”, admits the year’s leading recruit. “I was thinking about my return to racing when my uncle offered me the chance to join them, so it was an extraordinary opportunity. I can’t wait to get started because we are going to be a dream team”.

Still a little way of top form physically for the Silk Way, Gerard De Rooy will only be present as a team manager, before returning to the truck’s cab for the Dakar: “We are going to be able to present a united front and put pressure on our rivals. Together we can do it. I only know a few people who have the talent and ability to grab places on the podium and Hans is definitely one of them”.

The two cousins display a perfect example of cohesion, a fact for which the “team elder” Jan De Rooy can vouch for: “There will be no first and second driver. If there is a hierarchy, it will depend on how the rally works out. In any case, our aim is clear: both trucks must reach the highest place possible in the standings, with both on the podium if possible. And we shouldn’t kid ourselves: to reach this level, there cannot be any intra-team rivalry. They will have to work together”.

The next event on the calendar for Stacey is the Silk Way Rally, where he will be backed up by Jo Adua in the team’s second truck.

The east is rising… 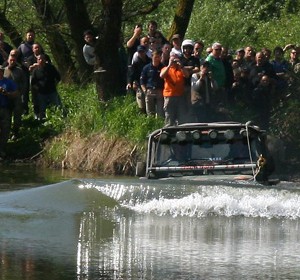 A man walks alone through the darkness. Every step an unseen struggle over the slippery ground until he drops to his knees...
Copyright 2011-2016 Rallyraid.net - RISE Network. All Right Reserved.
Back to top