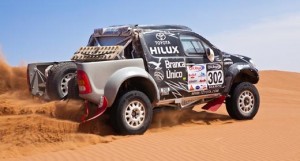 Nicknamed ‘Sand Rodeo’ the fourth leg of the OiLibya Rally of Morocco kept all its promises. Because even if competitors were forced to avoid Lake Iriki, rendered impassable by recent rains, the new route in the erg of Chegaga provided entertainment galore, and caused further upheavals. Two days from the final in Ouarzazate , the outcome of the 2011 edition, remains more uncertain than ever !

Everything started badly this morning for Joan Barreda. Winner of the second stage and overall leader yesterday, the driver of the No. 12 Husqvarna Speedbrain suddenly turned back after only 15 km. The rear fuel tank had cracked and was leaking; he turned back to his assistance and lost almost 50 minutes .Thus, losing any chance of victory.

Bikes: Rodrigues reacts…
With less than 9 minutes for the top 5 bikers, the balance will be in the details on the last two stages. Two drivers who have understood this a long time ago are: Jakub Przygonski (KTM 450 No. 2) and Frans Verhoeven (Sherco 450 No. 4), the two most regular drivers since the beginning of this rally. Never first but always in the top three, Jacob was second of the day and third overall today at 1:30, and the experienced Dutchman (fourth of the day and fifth overall).

Helder Rodrigues (Yamaha 450 No. 1 2011 World Champion), following his navigation troubles yesterday takes the overall lead ,27 seconds ahead of Portugal’s Paulo Goncalves (Husqvarna 450 No. 10). This promises a good final sprint, in which the Norwegian Ullevalseter (KTM 450 No. 5) also invites himself with a third place in the stage and a top 5 overall.

With no real chance to make the podium following his troubles on the first day, Marc Coma (KTM 450 No. 3), continues his test sessions for the Dakar, despite a minor fall today, near the Lac Iriki. It was without doubt a bad day, however, for Olivier Pain (Yamaha 450 No. 9). Already victim of a fall on Tuesday, he spent several hours on the trail trying to solve electrical problems. Ditto for Bruno Da Costa (Yamaha 450 No. 11), plagued by fuel supply worries.

Quads : Vincent Albira (No. 201 Honda) withdrew from the race following engine trouble. All the better for the Russian Dmitry Pavlov, winning once again this special ahead of the Bulgarians Cenkov (No. 200) and Vachkov (No. 202 Can-Am).

Cars : Terranova’s back!
Argentina’s Orlando Terranova and the Spaniard Lucas Cruz (Toyota Hilux Pickup No. 302) won the fourth stage and confirms ,at the same time, the potential of their brand new car in the sand and dunes. Second comes the small Optimus MD Rallye Sport No. 311 of Pascal Thomas and Pascal Larroque gaining 18 minutes on their teammates Régis Delahaye and Eugenie Decré (MD Rallye Sport Buggy No. 309), completely swayed by a missed Way Point ,but still second overall.

A Surprising leader since day one, the Dutchman Bernhard Ten Brinke, well supported by Mathieu Baumel of the Mitsubishi Racing Lancer No. 305, continue their course almost without fail. Despite being stuck in the sand (which cost them nearly 20 minutes) the ‘Flying Dutchman’ retains his overall lead with nearly an hour ahead of the buggy’s …

Victims of a roll in the double loop of Chegaga on Tuesday, Patrick Sireyjol and Didier Haquette (Huggy SMG Cummins No. 306) got their act together, making the fourth just ahead of the Mitsubishi Racing Lancer No. 303 of the Dutchman Eric Van Loon.

Not that great, in contrast for the BMW X3. Boris Garafulic and Gilles Picard. as their car rolled over and lost its passenger door. They reached the finish line very late … too late !

In the T2 category, the Spaniard Xavier Foj (Toyota Land Cruiser No. 329), leader yesterday lost too much time in the dunes of Chegaga. This profited Thierry Genovini and Franck Chahinian (Toyota No. 332), the second production vehicle today, just behind the Toyota Pickup No. 338 of Banaclocha and Tornabell.

Trucks: De Rooy in the top 5 !
First truck to point its long nose at the finish: the new IVECO Powerstar Torpedo No. 401 (Gerard De Rooy, Tom Colsoul and Darek Rodewald,), As for Elisabete Jacinto (MAN No. 400) lost more than an hour today in the dunes of Chegaga decidedly inhospitable to her. 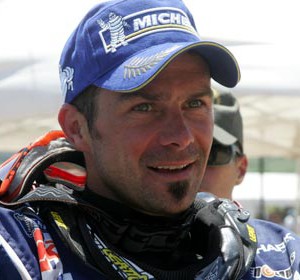 Although his last appearance ended with one of the rare withdrawals in his career, Cyril Despres has completed a competitive...
Copyright 2011-2016 Rallyraid.net - RISE Network. All Right Reserved.
Back to top