After an excellent and promising beginning in the race, with the sixth best time overall in the opening stage of the Dakar 2012, Carlos Sousa faced today the first setbacks in the second special stage, in a total of 295 km, from Santa Rosa del Atacama to San Rafael, in Argentina. 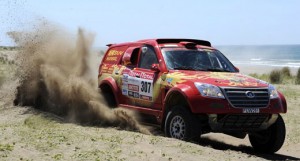 “There were too many little troubles for just one day”, complained the official driver of Team Great Wall Motors, at the end of a tough and very hot stage in which he finished in 11th, 17m08s after the fastest driver. The setbacks began only a few kilometers after the start, precisely in the fastest part of the whole stage, but where Carlos Sousa lost precious minutes, since he was forced to stop in order to… lock the driver’s door of his Great Wall SUV Haval “which opened to every bump of the road or change of direction. It was quite an odd situation, but it sometimes happens to the best teams! Worse than the stop was the loss of pace and also some concentration at the beginning of the race”, explained the Portuguese driver at the arrival.

Despite everything, Carlos Sousa managed to be among the 10 fastest drivers fairly until the middle of the stage, losing about 1m52s to the virtual leader until km 170. Soon after that Carlos Sousa would carry out a new long stop in the track, this time due to a flat tire:

“It was shortly before driving through the dunes, in an area of many hops and slopes and at a time when the suspension had lost some efficiency due to the heat. Here we really lost a lot of time, maybe about 7 to 8 minutes, because I had my door locked and had to get out through the co-driver’s side. It was a time-consuming and weary operation as far as the physical aspect is concerned, because it was about 45 degrees outside…” added Carlos Sousa, who mentioned again some discomfort related to the driving position of his car.

“Until the end of the stage, we forced the pace a little and managed to make up for some lost time. However, at the end, in an area of rocks, we decided not to take risks fearing another flat tire. In short, it was a stage than I won’t miss, due to the chain of little problems we had to face since the beginning, which took us some concentration. But tomorrow is a new day and the time lost at this phase does not cause us much concern considering our goals”, concluded the Portuguese driver, who occupies the 11th place overall after this stage, but only 1m54 from a place in the Top-10.

Tomorrow, Tuesday, the difficulties may increase in the stage that will connect San Rafael to San Juan, a distance of 499 km, from which 208 make up the third special stage of this Dakar 2012.

Approaching the Andes Mountain range, the landscape is bound to be breathtaking, but the day will bring hard work to drivers and co-drivers, due both to the concentration needed along the narrow mountain tracks, and the expertise required to go across the many rivers, where the rocks must be avoided at all cost. 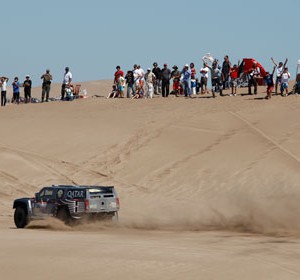 The title holder also made his rivals sit up and take notice in the car category, and from a long way back too! Following...
Copyright 2011-2016 Rallyraid.net - RISE Network. All Right Reserved.
Back to top