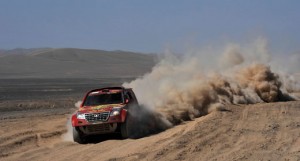 Five days to the arrival to Lima and after tem stages, Carlos Sousa returned to the starting point, taking over the sixth place he got at the beginning of this 33rd edition of the, precisely on the same day the convoy took leave of Chile.

In a particularly difficult stage which included a little of everything – dirt, stone, sand, dunes, fesh-fesh tracks and a lot of navigation –, the Portuguese driver was the eighth fastest driver to finish the 377 km of the special stage from Iquique to Arica, losing almost 44 minutes to the winner of the stage due to the various problems that conditioned his pace: “Unlike yesterday’s stage, today we had a very hectic day. For starters, he failed the car set-up completely and had some difficulties on the toughest parts of the track. Then we made some navigation mistakes, one from which cost us 15 minutes to find the right track. Coming to the end, passing through the dunes, we had to stop several times to lower the car temperature, which has been a persisting problem due to the deficient engine cooling system”, summarized Carlos Sousa when he arrived to Arica.

“All in one, we lost quite a lot of time today, especially with the many stops we had to make at the end of the stage. With no wind against us, the engine temperature rises above the reasonable limit, so the only solution is to stop the car and wait until everything goes back to normal. It is a little frustrating because we can do nothing else besides wait and watch the other cars pass us by”, complained the Portuguese driver, who despite everything benefitted from the problems with Krysztof Holowczyk’s MINI and for the second day in a row climbed another position overall.

“It is a fantastic result and we will do everything to keep it until the end. But there are still five days left and at this point the mechanics problems start to appear and any slight problem can cause a huge delay”, warned Carlos Sousa on the day before Peru becomes the 27th country to welcome the Dakar convoy.

A final note to the fact that Robby Gordon, currently in the third position overall, is at risk of being excluded from the competition by the College of Commissioners due to technical irregularities detected in his Hummer after yesterday’s stage.

Tomorrow, the 11th stage of the Dakar will take the drivers from Arica (Chile) to Arequipa (Peru), in a total of 598 km which includes a special stage of 478 km on tracks so far new to this rally. 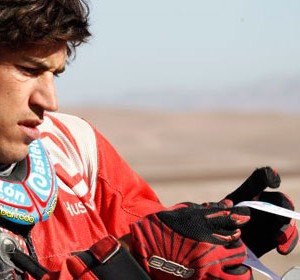 Despite injuring his right foot after 35 km of this 10th special stage, Joan Barreda confirmed his status as the major revelation...
Copyright 2011-2016 Rallyraid.net - RISE Network. All Right Reserved.
Back to top