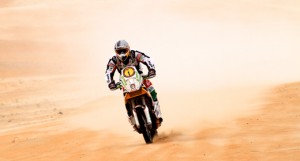 Marc Coma, this year’s Dakar Rally runner-up and the winner of last week’s Abu Dhabi Desert Challenge, heads to Qatar this weekend to make his final preparations for next week’s Sealine Cross-Country Rally, Qatar’s inaugural round of the FIM Cross-Country Rallies World Championship.

Spaniard Coma leads the four-round series after his Abu Dhabi success and knows that a podium finish on the new Qatar event – being organised by the Qatar Motor and Motorcycle Federation (QMMF) on April 16-21 – would stand him in good stead to win the prestigious title that was earned by Portugal’s Helder Rodrigues in 2011.

The 2012 FIM championship is being fought out over four rallies – the Abu Dhabi Desert Challenge, Qatar’s Sealine Cross-Country Rally and events in Sardinia in May and Egypt in October.

Coma finished third in last year’s championship after taking three maximum scores in the UAE, Italy and Egypt, but he failed to add to his points tally in Tunisia. Rodrigues won the Tunisian event and three second-placed finishes ensured that he ended the season 13 points ahead of Polish championship runner-up Jakub Przygonski.

Last week’s comfortable victory in the Abu Dhabi Desert Challenge was Coma’s fourth successive success in the UAE and his sixth on the event in total. The KTM 450 rider won three of the five desert stages to finish well ahead of fellow countryman Joan Barreda Bort, who now holds second position in the championship with his Husqvarna TE 449 RR.

“I was very happy with how things went in Abu Dhabi and hope to follow that success up with a good performance in Qatar,” said Coma. “Everything went according to plan there. It was a good start to the championship, but Qatar will be a totally new challenge for many of us.”

Portugal’s Paulo Goncalves, riding a second Husqvarna, finished third in Abu Dhabi and heads to Qatar in a similar position in the overall championship rankings. Fellow countryman Ruben Faria finished fourth on a KTM and Spain’s Jordi Viladoms, also on a KTM, was fifth. All five riders grace the impressive Qatar entry list, which features all but one (winner Cyril Despres) of the leading motorcycle riders who tackle the world famous Dakar Rally in January. 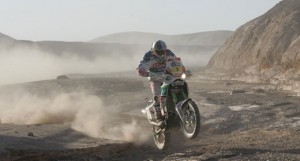 Chile’s Francesco ‘Chaleco’ Lopez has been one of the front-runners on the Dakar since the event switched to South America and the Bordone-Ferrari Racing Team have entered the South American in Qatar’s new event.

Adel Hussein Abdullah won the quad category in the Sealine Baja event last November – the event that ran as a candidate for FIM and FIA approval – and the Doha-based rider heads the local challenge on a KTM 525. Nasser Al-Mansoori has also entered the event from the host nation.

Administration checks and scrutineering for GCC and Qatar crews will be carried out on Sunday, April 15th and international teams will pass their checks on Monday, April 16th, prior to the ceremonial start in the afternoon.

There will be a timed super special stage on Tuesday, April 17th and the first of four desert legs of the new Sealine Cross-Country Rally begins on Wednesday, April 18th. Action draws to a close on Saturday, April 21st. 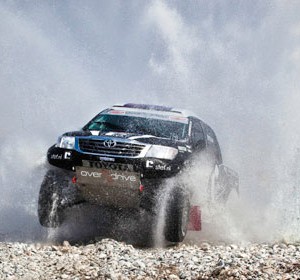