Ervideira: New designation at the 25th anniversary event of the SAR – Motoring Section

We are only six months apart from the 25th anniversary of the offroad event organized by the Motoring Secton of the Sociedade Artística Reguenguense and Adega Ervideira wine producer, so it is time to reveal some news on the event and to invite all to be present at this expected big party.

In this special year of the event led by José Prego, one of the oldest Portuguese offroad events, wine producer Ervideira, main partner of the organization, has decided to adopt a new designation for this round of the Offroad Portuguese Championship, now called “Vinhos Ervideira Rali TT”. Following the example of great success from 2012, the organization has brought under the same umbrella motorbikes, quads, buggys and cars, therefore, one can expect for a huge party in the Reguengos de Monsaraz region (Alentejo, Portugal), an event which will again give a very special color to its landscape.

When compared with this year’s edition, the idea of the organization is to perform all those competitions in the same days, between Saturday and Sunday. As such, the S.A.R. Motoring Section and Adega Ervideira are already preparing what’s to be expected as a huge event, and should soon release its latest preparations, namely in terms of the parallel activities which will be undertaken and which distinguish this event from the other ones from the Portuguese Championship. Let us recalled that in this year’s edition, besides an action where several trees were planted, there was also a “Future Drivers Track”, an action which had young children as the main protagonists, originated from schools in the area, which were alerted to some of the main road and driving issues.

As for structure, the S.A.R. Motoring Section event will be held on those two days, instead of three used this year.

José Prego, who has the responsibility of taking to the ground this event, from now on named “Vinhos Ervideira Rali TT”, is a happy man, preparing himself for such significant date. “We are aiming to make a memorable race in Reguengos region, taking the best from the celebration of this 25th anniversary. Therefore, we expect a big party, with lots of public present, and, of course, with the presence of top national drivers, I am sure, will not want to miss it”, he says. The Race Director takes this opportunity to “invite everyone to attend it, from drivers to teams and other motorsport agents”.

“We are counting with everyone on these two unforgettable days”, he adds, “on an event where the drivers are the main artists of the show. We will try to build up an event which follows the tradition of two and a half decades, aiming to everyone’s liking, so that in the end everyone wants to return in the following years”, concludes José Prego.

Therefore, in April do not miss the 25th anniversary of the now called “Vinhos Ervideira Rali TT”. The show and the animation are a promise, so you will not regret it. 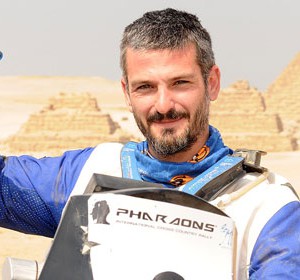 Jordi Viladoms will take part of Tamarugal XC Team and will run the Dakar with a Speedbrain´s Husqvarna bike Jordi Viladoms...
Copyright 2011-2016 Rallyraid.net - RISE Network. All Right Reserved.
Back to top