Lucio Alvarez and Ronnie Graue enjoy the dunes in Copiapo 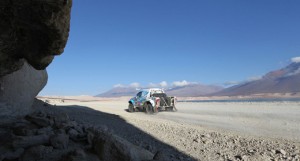 Fiambalá – Copiapó, the Dakar leaves Argentina by the Paso San Francisco and arrives to Chile. The road connection through the Andes was amazing; volcanoes, rocks in different colors in the altitude valleys, the wild donkeys, alpacas… After the frontier post called La Gruta, the asphalt made room for a dusty track, with an amazing blue lagoon on the right, with Andes reflection on it. It was the landscape of a postcard at 4768 m of altitude.

After 392 km of road connection, competitors entered the special of Copiapó, known by its variety of the tracks, its mountains and dunes, Lucio Alvarez´s favorite terrain, very impressing in the sand. Navigation was also part of this celebration, so Ronnie had a great time too.

At the bivouac, both friends, sixth in the special stage, laugh at each other: “It was like hell, says Ronnie to Lucio. In an uphill road, I wanted to go one way and he wanted to go the other way… He wouldn’t listen. He drives me crazy, but it is just the same on the wheel…”

Lucio recognizes that they were both right, but in their friendly exchange of opinion concerning navigation, they still enjoyed the day.

“It was a great special stage, says Lucio, a very varied selective section, with a bit of everything, sand, dunes, sand tracks, “guanacos” grass, which we should call it because in South America we do not have camels.” (In Africa, they call it camel grass).

We crossed the huge dune of Medanoso, the highest in Chile (550 m), which was really fun. At the end of the “guanaco´s grass”, the “Leona” (name that Lucio gave to their Toyota), is doing great, and she behaved all the way in the special stage.”

After they accomplished their 6th place in this hard stage, Lucio and Ronnie take the 13th position in the overall standings. 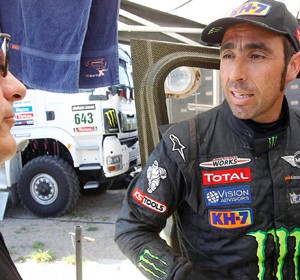 The distance to Santiago is reduced day by day – just another two days to go to the relieving final finish line. The tension...
Copyright 2011-2016 Rallyraid.net - RISE Network. All Right Reserved.
Back to top