De Villiers and German co-driver Dirk von Zitzewitz maintained their stranglehold on second overall, while Alvarez and navigator Ronnie Graue climbed to 13th position. All four surviving Overdrive Toyotas are now in the top 15 with two stages of this year’s rally remaining before the podium finish in Santiago on Sunday. 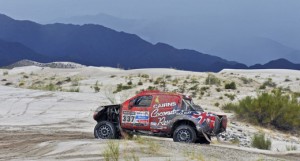 Only 93 cars began the 392km road section from Fiambalá and across the Andes mountain range into Chile via the San Francisco Pass. Ahead lay a 319km special stage through the Atacama Desert to the overnight halt in Copiapó. It began at an altitude of over 2,300 metres above sea level and featured a variety of surfaces, including some treacherous sand dunes.

The ASO eventually handed Robbie Gordon the stage win on the shortened special into Fiambalá and the American led crews into action, but Guerlain Chicherit and overall leader Stéphane Peterhansel took up the running and were on the pace through the early waypoints, with Orlando Terranova and De Villiers in close attendance. Chicherit, however, was badly delayed after around 120km with transmission problems.

Gordon, Peterhansel and Joan Roma took up the reins as the stage progressed and Roma went on to win the special in a time of 3hrs 36min 34sec, with Gordon and De Villiers finishing second and third. Peterhansel lost time stuck in the dunes, came in fourth and saw his overall lead trimmed to 50min 21sec by De Villiers.

Geoff Olholm and British co-driver Jonathon Aston set the ninth quickest time in their Cairns Coconut Resort-supported Toyota Hilux and climbed into the top 10 when Bernard Errandonea was one of several drivers who lost time stuck at a large dune after 221km. The Australian Toyota driver now holds 10th in the general classification. 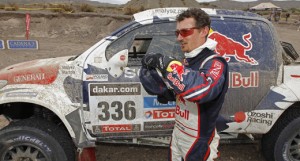 Former ski jump champion, sponsored by Red Bull, Adam Malysz  and co-driver Rafal Marton were overtaken in the overall standings by Alvarez and Graue after the stage. The Poles began the day in 14th position and still maintained their place after setting the 15th quickest time.

The Venezuelan pairing of Nunzio Coffaro and Daniel Meneses were 18th overall at the stage start with the Team Azimut Toyota and now occupy 15th after recording the 11th quickest time of the day.

Tomorrow (Friday) teams tackle the penultimate stage of this year’s Dakar Rally between Copiapó and the town of La Serena on Chile’s Pacific Coast.

A liaison of 90km takes teams in a northeasterly directly to the start of the 441km special, which climbs to over 2,500 metres above sea level before descending through a series of dunes and across numerous deceptive rocky trails to a finish north of Vallemar. A second liaison of around 204km takes teams along the coastal highway in a southerly direction into La Serena. 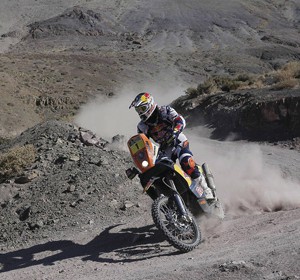 Teamwork was on the agenda for the Red Bull KTM Factory team in Stage 12 of the Dakar 2013 when overall leader Cyril Despres...
Copyright 2011-2016 Rallyraid.net - RISE Network. All Right Reserved.
Back to top