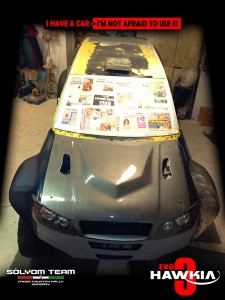 Opening round of the Hungarian Championship, Toolimpex Cup starts in Nagykálló on 12 April and finishes on 14 April. Around Sólyom Team two importnat things started this week: assembly of the HAWKIA that is now in bits and the swift recovery of the driver Olivér Sólyom.

During the winter the race car of the team needed to be disassembled completely in order to reduce weight. Whatever was found unnecessary was thrown out immediately. (To calm those who are extremely worried for Sólyom team: rollcage wasn’t found an ‘unnecessary weight’ so it hasn’t been modified.) The ‘nip and tuck’ of the exterior, which was postponed in the past years due to lack of time, is also being carried out now. The ‘little blondie’, that is not blondie any more because its colour changed from yellow to graphite grey, is going to get a new ‘figure’. The task for the four weeks left until the first rally of the year is to assemble the half-ready HAWKIA very quickly.

At the beginning of February Olivér Sólyom had an operation for lumbar cyst. At the moment doctors are optimistic about his recovery but they can’t exclude protraction of his healing. The task for the four weeks left until the first rally of the year is to assemble the half-ready Olivér Sólyom very quickly.

“Unfortunately there is still an open wound at my waist. It restricts me in many things and after 3-4 hours of load i can’t stay on move. With my excellent physician, Head Surgeon Dr József Szabó we work on making me ready for racing on time. In my opinion the work in the workshop is on the right path. At first glance it seems like a vehicle in bits can’t be assembled in such a short time but I can see the end already, everything will be ready on time. During the winter we said goodbye to some sponsors and welcomed some new like Gamma Trans and Kincses Szerszám and after some years of absence Speedy Racing became again our partner. Finally I want to welcome everyone to the 2013 season with a quotation: “Believe the beetles, flies, moths and mosquitos that in the end there is fucking great light!” (30y) 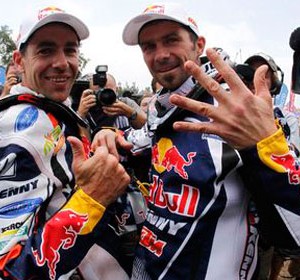 After 12 years and 10 Dakar podiums, 5 of which were victories, Cyril Despres and KTM have jointly agreed to go their separate...
Copyright 2011-2016 Rallyraid.net - RISE Network. All Right Reserved.
Back to top