This year, the Dakar Challenge will allow 10 vehicles driven or ridden by Dakar novices to line up at the start next January in Rosario. The selection starts this weekend on the Tecate Score Baja 500 in Ensenada in Mexico, where the best amateurs will take a step closer to the world’s biggest rally-raid.

The Baja 500 is already a leading event in the all-terrain calendar on the American continent. For the 2013 edition, some competitors have chosen to up the ante by registering for the Dakar Challenge, which promises free registration on the next Dakar to the best biker and best car crew. Among the specialists on this 500-mile race, some have already experienced the Dakar, such as BJ Baldwin, one of the discipline’s leading lights, but also Mark McMillin and especially Robby Gordon. Naturally ineligible for the Dakar Challenge, they will still serve as benchmarks for pretenders to victory this weekend. However, even the quickest will not be sure of seeing Rosario: The final standings of this special Dakar Challenge “Made in USA” will only be complete after the second step of this combined trial, the Eldorado Reno 500, which the participants will tackle between 12th and 14th July. 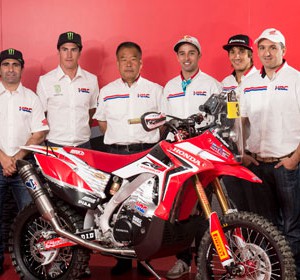 The Mugello circuit played host today to the presentation of the TEAM HRC due to take part in the next Dakar 2014. Five...
Copyright 2011-2016 Rallyraid.net - RISE Network. All Right Reserved.
Back to top