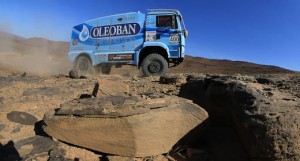 The team OLEOBAN®/MAN Portugal fulfilled today the second leg of the Rallye Oilibya du Maroc 2013 and maintains the leadership of the truck category, position achieved on the first day of the competition. The pilot Elisabete Jacinto completed the selective sector of 240 kilometers in 3h43m07s. The MAN TGS of the Portuguese team was the third fastest truck on today’s stage.

The Portuguese will begin the third day of competition wining 11 minutes for the Tatra of Tomas Vratny, pilot of the team Bonver Dakar that is now in second on the truck category.

Today’s special crossed the mountainous region of Zagora and proved to be quite complicated due to the extreme hardness of the track: “This stage was very difficult. The path was snaking and full of ditches and rocks. At the beginning we rolled at a very good pace but then the road got rocky and we were delayed due to the difficult tracks. The tracks of the mountain are always very complicated, but in general, we managed to keep a good step and we are pleased with the outcome” said Elisabete Jacinto at the finish line.

Tomorrow the Rallye Oilibya du Maroc in 2013 returns to the sands of Cheggaga. The third stage of the race promises to show some of the most beautiful landscapes of dunes throughout the race. Lovers of sandy passages will be thrilled with this stage. The selective sector will consist of 250 kilometers. At the end of the day the fast tracks will appear and the beautiful Moroccan landscapes will follow the teams until the end.

TEAM HRC continues to lead the Morocco Rally. In a 298 km second stage, including 240 against the clock, 'Speedy' Gonçalves...
Copyright 2011-2016 Rallyraid.net - RISE Network. All Right Reserved.
Back to top