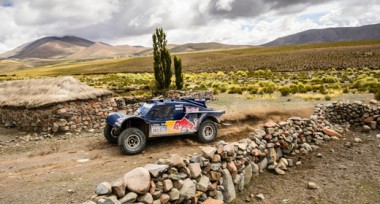 The Spaniard was back in the thick of the action on Stage Eight as the race crossed over the Andes Mountains.

Celebrations surrounding Carlos Sainz’s win on Stage Seven last night were kept to a minimum as the team worked on a plan to maintain this momentum throughout the entire second week of the 2014 Dakar Rally.

The job was not made any easier for Carlos and co-driver Timo Gottschalk as they found themselves opening the road on Stage Eight. Being the first car onto the 302km timed route between Salta and Calama added extra pressure to the pair’s navigation skills.

The Red Bull SMG Rally Team duo dug in along the twisty narrow tracks in the foothills of the Andes Mountains and eventually only one car managed to get past. Later in the stage Carlos and Timo were then able to take advantage of the track widening. During this passage Carlos cranked up the speed and got the Buggy flying through the bumpier sections.

The final result for Carlos and Timo was third place on Stage Eight, 2m 36s behind stage winner Nasser Al-Attiyah. The timings for the stage leave Buggy #303 in 6th place in the general rankings with the gap to race leader Nani Roma cut but a further seven minutes to 1h 43m 59s.

Carlos and Timo’s team-mates Ronan Chabot and Gilles Pillot were also moving up on Stage Eight as they brought their Red Bull SMG Buggy into Chile. Ronan and Gilles took 39th place on the route from Salta to Calama to move into 24th place in the overall classifications.

As the 2014 Dakar Rally settles in Chile the Atacama Desert becomes a major feature of the race. The final section of tomorrow’s timed special stage will be contested over dunes before finishing with the spectacular steep drop into the bivouac at Iquique that has become a trademark of the race in recent years. 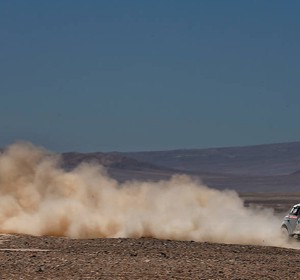 X-raid and the Monster Energy X-raid Team celebrated a successful border crossing to Chile. In stage eight, from Salta to Calama,...
Copyright 2011-2016 Rallyraid.net - RISE Network. All Right Reserved.
Back to top