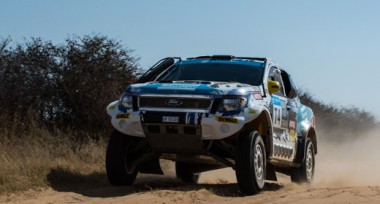 The 3rd leg of the Dakar Challenge 2014, which took place in Botswana, saw Gary Bertholdt and Siegfried Rousseau pick up their tickets for the Dakar 2015 in the car category, whilst in the bike race, quad rider Brian Baragwanath triumphed. More importantly, this leg once again demonstrated the success of the “Dakar Challenge” formula.

The leading race in the ultra-professional South African rally championship, the Toyota Kalahari 1000 Desert Race was, for the 3rd consecutive year, a leg on the Dakar Challenge 2014 with, at the end, two new registrations for the Dakar 2015 to be won: one in the car category and one in the bike/quad category, although the bike race did not count towards the South African championships. This was a mere detail, however, for the very high quality field in attendance, since many of the riders came to race with the aim of obtaining their place on the world’s biggest rally-raid next January.

It should be said that with a new route, including three days of racing and approximately 900 km of timed special stages on an exclusively sandy terrain, which was however rendered difficult and bumpy by the vegetation typical of the Southern African bush, this 3rd leg of the Dakar Challenge 2014 offered an ideal test for all the pretenders for a place on the Dakar 2015. Most of the participants admitted that they saw this event as the first major step of well and professionally developed long projects destined, over the medium term, to take them to the main event in January. In the space of only a few years, the Dakar Challenge has therefore become an important way of grabbing a ticket for its parent rally.

Indeed, this was the goal of 26-year old quad rider Brian Baragwanath who, by winning his category in Botswana, obtained his registration for the Dakar 2015… for which he had already registered! In fact, having launched a Dakar participation project 3 years ago, the South African rally-raid champion in 2008 came to Botswana with the sole intention of winning the precious ticket to South America, but had already filed his registration on the off-chance of it being accepted, along with 2 other quad rider friends. Now of course, his registration for the race is signed, sealed and delivered.

Gary Bertholdt and Siegfried Rousseau have also managed to save on registration in the car category. Once again, it was not down to luck! 4th in the general standings in Botswana behind the wheel of their Ford Ranger, the winner of the South African championship in 2003 and his co-pilot set themselves the Dakar as a goal in the short-term, going as far as travelling to South America last January in order to watch the event and especially familiarise themselves with the terrain with the view to possibly participating in 2015. With their victory, their plans have borne fruit!

Double points up for grabs in marathon Botswana 1000 Desert Race 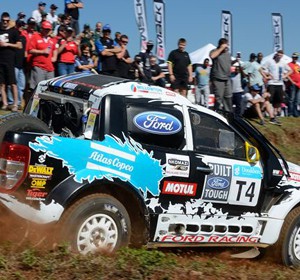 Double points up for grabs in marathon Botswana 1000 Desert Race

The Atlas Copco Ford Racing team is aiming for a strong showing in the Botswana Desert Race at the end of June as the 2014...
Copyright 2011-2016 Rallyraid.net - RISE Network. All Right Reserved.
Back to top