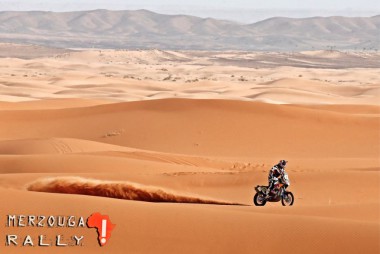 It was a very good day for the KTM Factory rider Sam Sunderland, winner of the MR 2013, who claimed the first stage of the Merzouga Rally in front of Stefan Svitko (KTM) and Gerard Farres (KTM). Alessandro Botturi (Yamaha) finished in 4th position, while Antoine Meo – the fastest rider of the Prologue – closed the top 5.

Mathias Walkner was the first rider to take the start of the 157km long special stage. He rode with Antoine Meo and Laia Sanz for most part of the stage, before they made some navigation mistakes, allowing Sunderland and Svitko to catch up. Meo finally finished 5th, with Walkner 6th, Piatek 7th and Laia 8th.

Bruno Martins was the fastest of the Expert category, followed by Emanuele Piva and Paolo Caprioni.

In the SSV category the Spanish crew Yeste – Cuadra of Enjoy Quads wins the stage 1 with 5’ of advantage on the duo Abel-Manez (Los Amigos), Ibarz – Torne (enjoy quads) completes the provisional podium.

The Stage.
Today the MR 2015 came into action with a first technical stage with the competitors crossing two of the three Ergs (mountains of sand) of the Merzouga Desert: the Ergs Chebbi and Snaguy. The competitors took the start by the Oued Ziz, heading south via a series of small dunes and a fast and sandy river bed. With Cap direction Erg Chebbi, the big mountains of dunes were crossed from North to South, before tackling the Erg Snaguy. The route for the Expert finished at the CP2, while the Pro tackled the rocky Scorpion Pass that brought the competitors back to the Erg Chebbi that was crossed this second time on the west side till the Yasmina lake. After a path at controlled speed, the riders challenged themselves on the desert stadium, a 2-km long “circuit” of dunes and natural jumps.

The energy is back! 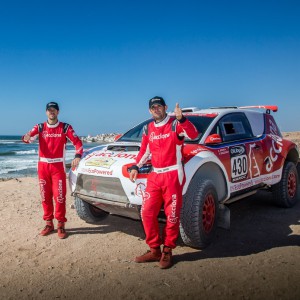 The energy is back!

Today at 15:35 local time, the ACCIONA 100% EcoPowered car crossed the finish line of the last stage of the International...
Copyright 2011-2016 Rallyraid.net - RISE Network. All Right Reserved.
Back to top