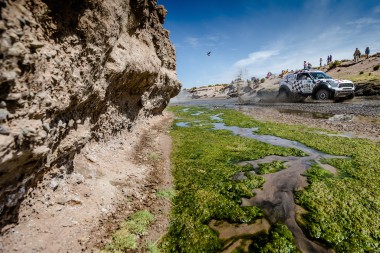 Today, the MINI ALL4 Racing Crews had to cope with the longest stage of the 2016 Dakar Rally: 542 kilometres around the Bolivian city of Uyuni. “Today’s stage featured a lot of different terrains,” said Nani Roma. “Flat, sandy and rocky sections, the mountains with winding as well as fast sections… Yes, the stage had it all.” The MINI ALL4 Racing drivers once again impressed with a great team performance: nine of the pairings made it to the top 20.

Nasser Al-Attiyah once again finished fifth: “We tried to complete the stage without any problems. Things are running really well for us but we just lack the top speed we would need to pressurise the Peugeots. We will try to defend our fourth position in the overall standings – after all, we are the best placed vehicle with four-wheel drive in overall classement.” Yesterday, Roma still had his problems with the altitude but today he was able to push again and worked his way up to sixth. “I felt much better than yesterday,” said the Catalan. “With 300 kilometres covered I arrived in the dust of Orly. His trail of dust had a length of about 150 metres and so, he couldn’t hear the sentinel. At the same time, I didn’t want to take any risk. But he also was driving really well.” Orlando Terranova finished behind Roma in eighth position and holds 11th in the overall standings.

Hirvonen once again had to cope with virgin soil. But the former WRC driver familiarises himself better and better with the new challenge represented by the off-road sections. “Today, things ran really well for us,” said the Finn. “No problems, no damaged tyre. Compared to yesterday, reading the route was difficult. Therefore, I didn’t push but I’m happy with our time, nevertheless. I’m still learning, particularly in the off-road sections. There, I still tend to being too careful every now and then.”

Just like Hirvonen, Harry Hunt and Kuba Przygonski also contest their first Dakar Rally with the MINI ALL4 Racing. Hunt finished 14th, today. “This was the longest special stage I’ve contested in my entire life,” revealed Hunt. “I could close in on Kuba and passed him. Apart from that no special incidents – it even was somewhat boring. But you had to really focus at some spots to avoid the risk of a puncture.“

For Przygonski it’s even the first Dakar at the wheel of a car. To date, he was riding a motor bike. “We encountered no problems whatsoever and the MINI ALL4 Racing ran perfectly”, said the Pole. “We had a small battle with Harry, today, and that was big fun. In the altitude, Andrei and I felt good. Not perfect but good. I enjoy sitting at the wheel of a car – particularly if you think about the rainy days we had to cope with. But I had to accustom to somebody sitting next to me and telling me where to go.”

Tomorrow, the seventh stage will take the field back to Argentina. And on Sunday, the teams will spend their day of rest at Salta. However, the service Teams will have to cope with a massive distance, tomorrow, and will arrive in the bivouac only late in the evening. At the same time, the pairings also will have to cover 817 kilometres, with the special stage distance amounting to 481 kilometres. 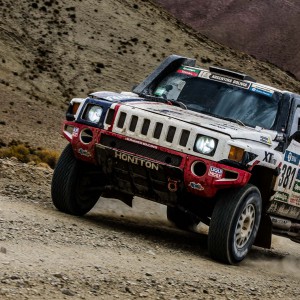 Tomas Ourednicek and Pavel Vaculik successfully finished the second part of the marathon stage of the 2016 Dakar Rally. The crew...
Copyright 2011-2016 Rallyraid.net - RISE Network. All Right Reserved.
Back to top