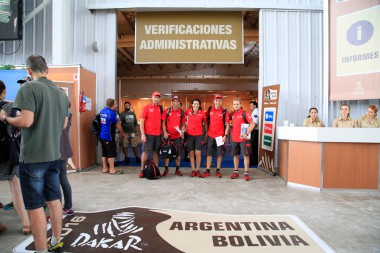 It is a ritual procession compulsory for each and everyone of the components of the Dakar caravan. Nobody escapes. It may sound exaggerated, but the administrative checks are one of the most demanding stages of this test, without sand or heat, but full of hardships from the start to the finish of this tedious and lengthy process.

Miguel Puertas and his men went out to the “special” at 09.00h, completing the 25 required administrative checks in 3 hours. Papers and certificates dancing from table to table while riders greeted their teammates and rivals in Technopolis. Nothing is left untouched: personal data, insurance payments and registration, medical documentation, photography of each pilot, GPS course, licensing, documentation of motorcycles, and so on until the certification checklist is complete.

Upon completion of the administrative checks, the organization grants a time of 20 minutes to present the bikes to scrutineering, where it is certified that they conform to the regulations. The bikes, ready for review, were presented promptly at Technopolis where awaited an army of testers, eager to check that everything was in order. In total, five KTM’s dressed in HIMOINSA red: three “Rally” models for Cervantes, Farres and Gimeno, and two “Enduro Kits” for Romero and Oliveras.

Almost two hours later, 5 bikes made their exit through the opposite end of the hall, toward the closed park, where they will spend the night awaiting the start of the prologue, crossing the starting podium.

5 HIMOINSA Team riders have passed the test without penalizing and are now officially ready to compete.

After the New Year’s eve celebrations,  which were shifted to 20.00h local time to coincide with relatives in Spain, this New Year day was dedicated to rest. New ambitions and one desire for the whole HIMOINSA Team: to make the most of this year’s Dakar, which is about to begin.

Tomorrow, issue No. 38 of the Rally Dakar will start with the prologue and the first of the 9.320 kilometers that all riders will face. The team is ready!

The fifteen minute warm up
The competitors are timed over a distance which is long enough to separate them into a logical starting order for the next day, but not really long enough to talk about a first day of competition. The mini-special section and the liaison section to the light bivouac of Rosario should not cause any damage… unless drivers are really unlucky and/or reckless! 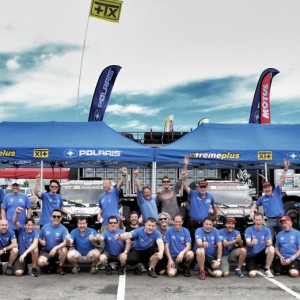 Times goes by fast. After a complete season of the world championship with Polaris RZR 1000 XT+30, here is the Xtremeplus...
Copyright 2011-2016 Rallyraid.net - RISE Network. All Right Reserved.
Back to top