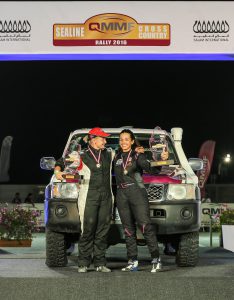 In their first-ever foray into the spectacular world of cross country rallying, the three all-female crews battled against some of the toughest terrain the FIA World Cup for Cross Country Rallies has to offer. Throughout the five-day event, which covered 1,633.38 competitive kilometres over five punishing selective sections, they had to overcome mechanical problems, challenging navigation, punctures and the inevitable frustration of getting stuck in the dunes, a situation which requires strength, stamina and an exacting technique to free the car from soft and forever shifting sand. And all in the searing heat of the vast and lonely desert.

Top results were never the aim of the game, or expected from the crews; both QMMF and the FIA Women in Motorsport Commission were focused on providing an incredible opportunity for young women to try a new discipline and demonstrate that dreams in all forms, and areas, of motorsport are possible for any young woman determined to give it a go.

Even so, Nissan Patrol #246 piloted by Spaniard Cristina Gutierrez and South Africa’s Sandra Labuscagne was classified at the end of the Sealine Cross Country Rally, the rookies 24th overall and faring the best of the three crews. They ran well on the opening day, despite getting stuck in the dunes, but then suffered an engine problem in the second selective section, forcing them out for the day. A broken front differential lost them more time but they persevered to the end and were delighted to reach Losail and the finish of one of the toughest challenges of their lives.

Cristina Gutierrez: “In cross country there are many kilometres, you have to learn to get out of the difficulties encountered, and you have to know how to control your nerves and learn to keep a steady pace for many hours. But challenges are always opportunities for learning, and especially as we are here for the great opportunity we have been given. I will continue in this speciality because I feel very identified with everything that surrounds this world, and hopefully I will continue to find support from it to continue growing as a driver. Of course I want to make a special mention of Sandra, my co-driver, who did a brilliant job getting me to the end of the stage every day.”

Sandra Labuscagne: “I really enjoyed every second! It was an experience I will never forget. The terrain was a huge challenge for driver and co-driver; it was a good mix of rough rocky sections, fast tracks and the tough dunes. My driver Cristina had a great week and we are very fortunate to have won the highest-placed female team trophy. I would like to thank QMMF and the FIA Women in Motorsport Commission for this great opportunity. Without the guidance and expertise of Jutta and Fabrizia we would not have been able to succeed!”

New Zealander Emma Gilmour, partnered by Lisette Bakker from the Netherlands (#245), also had a mix of problems and retired twice with a broken wheel hub, the second time disappointingly close to the finish and a classified result. Their rally didn’t get off to a great start with a broken GPS on the first day and while they ran well the following day, they were slowed with a puncture, got stuck in the sand and lost their way in the dunes.

Emma Gilmour: “The whole cross country training and racing has been an amazing experience and I thoroughly enjoyed the stages; navigating the dunes and driving flat-out across wide open spaces and then nursing the car over the rougher rockier roads. It was all I expected, and more, and I really hope that I will have another opportunity to start and finish a cross country rally. Dakar maybe?! A very big thank you to QMMF and the FIA for making the whole experience happen, and especially Jutta and Fabrizia who had the dream and the passion to make the training a reality and who put so much energy into the project. It was a shame we had mechanical problems that prevented us from repaying everyone’s efforts. I really hope I get to go cross country rallying again soon!”

Lisette Bakker: “The experience we gained during this week is amazing. Last year, I had never worked with a GPS system and had just a slight idea how a cross country rally would be run. Now we did 350 kilometre stages in very difficult conditions without missing waypoints. Without the FIA Women in Motorsport Commission, QMMF, Jutta, Fabrizia, the service team and everybody else that supported us, it would never have been possible to learn so much in such a short time. I hope I will compete in a cross country rally again to gain more experience and improve my navigation skills. Besides learning about regulations, navigation, driving in difficult terrain and technical education on the car, we learned, once again, that rallying is a team sport. Driver and co-driver have to work with each other and fully trust the other person, but also they have to work with the service team to keep the car in good condition.”

In the third Nissan Patrol (#244), Charlotte Berton benefitted from the experience of accomplished navigator Antonia de Roissard – who stepped in for Yasmeen Elmajed at the last minute. The all-French crew lost time in the first two sections with punctures and they too had their moments digging the car out of the sand. In the fourth stage however they broke the rear differential and then ultimately succumbed to an oil leak on the final day, again so close to the finish.

Charlotte Berton: “I think I can say I have experienced all the adventures in cross country rallying. After five days of racing obviously I am disappointed not to be at the finish line after the efforts we made. The pleasure from driving is certainly very different from the sensations I get from asphalt rallying, but to drive in the sand, surf on the dunes, travel hundreds of kilometres and cross the vast desert is something really addictive.”

Antonia de Roissard: “Jutta and Fabrizia were a big support in terms of friendship and advice and the experience has been fantastic, even more so due to the level of the race, which was very high in terms of driving skill and navigation. I am delighted to have been part of this experience; I have met great friends, had a lot of fun and it was a privilege to represent the QMMF team and FIA Women in Motorsport.”

Jutta Kleinschmidt, the first and only woman to win the Dakar Rally, was also competing on the event and finished a fine fifth overall. The German, who along with former co-driver Fabrizia Pons mentored the three crews before and during the event, was impressed with the way they approached such a daunting challenge: “I am so happy they were able to have this new experience and race their first cross country event thanks to this initiative by the FIA and QMMF,” she said. “This discipline is really tough, a lot of the time you are on your own in the desert and you have to fend for yourselves. The crews approached the event seriously and with respect and have done well, especially considering the overwhelming five-day challenge. Everyone had a great time, which was equally important, and they have learned a huge amount, probably as much about themselves as about cross country rallying.”

Adding to her comments, Fabrizia Pons said: “I am very very happy we have been able to realise this project, thanks to QMMF. The rally has been difficult and demanding, but everyone did a great job and I feel very proud of our crews.”

Summing up the whole selection and training process, Michèle Mouton, President of the FIA Women in Motorsport Commission said: “I cannot thank Nasser Al-Attiyah enough for his vision and enthusiasm for this project, and also the new President of QMMF, Mr Abdul Rahman bin Abdul Latif Al Mannai, for his on-going support. We are absolutely delighted to have realised this dream for six young women and clearly they have really enjoyed the cross country experience and had fun. Now we have to consider how we can continue to support these types of activities and give more women a chance to compete in motorsport.”

The Sealine Cross Country Rally, the third round of the FIA World Cup for Cross Country Rallies, was won by former double Dakar victor and multiple champion in rally and cross country competition, Nasser Al-Attiyah. The Qatari, with French navigator Matthieu Baumel alongside him, won his home event for the fifth time in six years and takes a commanding lead in the World Cup. And he too even took time out of his pre-rally preparations to give the QMMF/FIA Women in Motorsport crews a spin in his Overdrive Racing Toyota Hilux before the event started; undoubtedly another highlight in their cross country voyage. 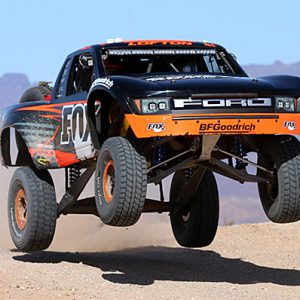 The Method Race Wheels Laughlin Desert Classic presented by Canidae Tap It kicks off this week with a nearly week-long series...
Copyright 2011-2016 Rallyraid.net - RISE Network. All Right Reserved.
Back to top