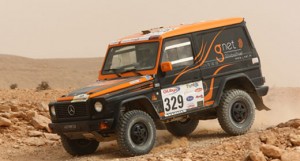 Alexis SANZO is not a beginner, fan of automobile and motorcycle since the age of 9 years, he chains for years the rallies and the raids in Africa, in Europe and even in America. In motorcycle, in car or in buggy which he builds himself, nothing frightens him, the desert has not secret for him! Faithful for years in the OiLibya Rally of Tunisia, this year he faces the great dunes of southern Tunisia to prepare the Dakar 2012.

This passion passed by his father has already reserved for him many surprises: ” in 2002, on Dakar, my motorcycle broke down in the middle of desert. I had to walk 15 km following straight ahead in front of an Oasis, counting the number of dunes that it remained me to cross. At the end of my trip I met servicemen, but my adventures were not over yet… on the Road to retrieve my bike we ran out of battery, we had to sleep on night alone in the desert. ”

Persevering and optimistic nature, this father of two children returns into the race motivated and well prepared on the ground of a country that he really apreciates moreover since the 14th of January. In this regard Alexis SANZO is positive and say: “I am serene with the political climate, the country is actually stable. It floats through the streets of Tunis a new idea of Tunisia and in the minds a willingness to step forward”. So it is in good conditions and in order to take maximum pleasure that this driver prepares his race and his Mercedes G CLASS. 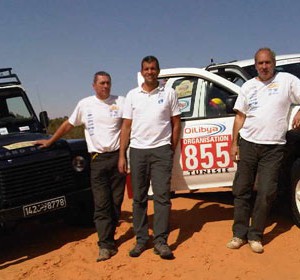 At the end of February the NPO team joins Tunis and goes directly to the South of Tunisia to realize the 15 days of reconnaissance...
Copyright 2011-2016 Rallyraid.net - RISE Network. All Right Reserved.
Back to top