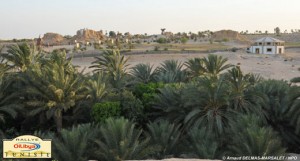 Under a blazing sun, the oasis of Tozeur today welcomed the administrative and technical checks of the 30th Oilibya Rallye of Tunisia. A special anniversary edition, taking place hardly three months after the great wind of hope that swept through the country. So it is, in a scent of jasmine and renewal that competitors gear up to the start for the first round of the FIA World Cup and the FIM World Championship Rallies. An Oilibya Rallye of Tunisia 2011 divided into 6 stages and over 1,500 kilometers of trails and dunes.

Francisco Lopez, (motorcycle category), winner last year, is here to defend his title. The Chilean and his Aprilia 450 will have quite a task given the very strong contenders present at the start of this edition of the thirtieth Oilibya Rally Tunisia. The danger comes from the Yamaha clan with the Portuguese Helder Rodrigues and Spaniard Jordi Viladoms. But “Chaleco”, as he is known will have to be suspicious of Jakub Jacek Czachor and Przygonski on their KTM 450. Polish pilots from the Orlen Team can count on the experience of Marek Dabrowski riding a KTM 690.

Nice battle in perspective also among the quad bikes the Frenchman Pascal Delesque and his new Honda is expecting the competition to get up close, and personal. And we are counting on the pugnacity of Norberto Cangani (Polaris), the Bulgarian Todor Hristov (CAN-AM), but also the Russian Dmitry Pavlov (Honda) and the Tunisian champion Karim Dilou to hound him …

Back on two wheels with an impressive Enduro Cup for the open Series. They will be more than ten riders from the 2011 edition with, for example, the young Frenchman Thomas Bourgin (Husaberg), but also the British Jago Pickering (KTM) and Tobias Younger (KTM), Xavier Moreau (KTM), Thierry Roux (KTM) and Laurent Weibel (KTM), eager to enjoy this Rallye Tunisia to glean as much experience.

For several years, Ales Loprais has been established as the most regular opponent of the Kamaz team, even though he too is affected...
Copyright 2011-2016 Rallyraid.net - RISE Network. All Right Reserved.
Back to top