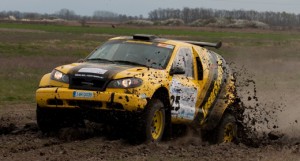 Because of a series of lateness of parts, the racing car of the team arrived in the service park in Hajdúszoboszló in 75% condition. Sólyom Team got 4 pm as final deadline to enter the parc fermé after scrutineering. Big rush-work started on the ’redressed’ HAWKIA, even the neighbours, the mechanics of Imre ‘Warm-hearted’ Varga helped to get the car ready on time. Finally the racing car entered the parc fermé at 3:59 pm so the team was able to start the season.

After the start, on the transfer section the engine started overheating and the car started to lose cooling water. After three stops due to this problem, Olivér Sólyom decided to use the forfait rule and returned to the service park where it turned out that the joint effect of three-four smaller bugs caused the bigger problem. Olivér Sólyom had nothing more to do so in an unguarded moment he proposed to team leader Viktória Besenyő.

Olivér Sólyom: ‘I would like to say thank you to the organisers for their help and i am very grateful to my mechanics, Csaba Bélteky, Zoltán Pék, József ‘Szepi’ Megyeri and the mechanics of Imre Varga, Miklós Iván and Pál Németh for their superhuman efforts with which they made the HAWKIA ready for start! But away with the problems! We are waiting for tomorrow with enthusiasm! Sky is blue, grass is green and even Viki said yes!’ 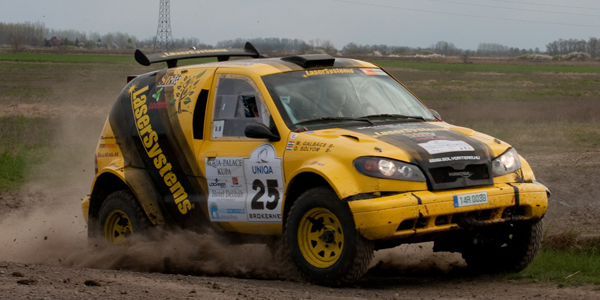 Viktória Besenyő: ‘We should get used to the fact that we don’t need to be worried because in the last moment everything gets ready. And never one minute earlier. When we realised that after the forfait we could start on Saturday and we had two more hours for reparations before we had to enter the parc fermé I told Olivér joking that now you could even proposed to me and for my biggest surprise he pulled out a ring. They say that everyone in the service park knew about his plan except for me. Is it nice to keep secrets from the team leader?’

By Saturday morning the team set up its strategy: it’s no use to damage the vehicle which is not hundred percent yet. So the aim was to complete one special and stay in race. Bad news came early in the morning: quad rider of the team, Kitti Csete couldn’t continue the rally due to health and technical issues. She couldn’t even start from the parc fermé. The crew Sólyom – Galbács completed Saturday’s first special, the only problem was that the engine got water.

Olivér Sólyom: ‘Yes, one can say that this isn’t a nice strategy but i think others would have given up already on Wednesday or Thursday. We are here, on Saturday, and in whatever way but still in race. The new suspension and the new gearbox are excellent! HAWKIA doesn’t have much in common with last year’s car. I don’t drive flat out yet because I don’t want more problems than we have already because of insufficiencies. We completed one special today successfully, our goal is scoring points on Sunday.’ 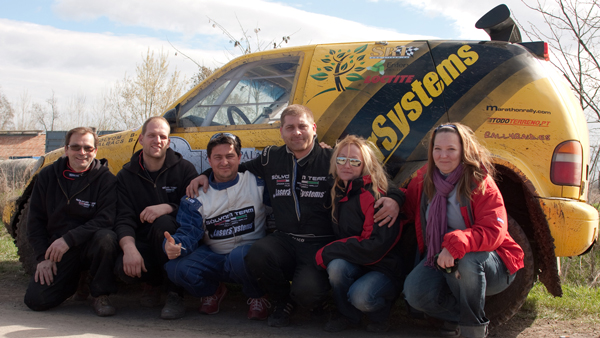 Mátyás Galbács: ‘For me the the problems started with the fact that we didn’t have navigational devices, so I was more like ballast in the car. The old coil of the speedometer broke so we had no idea about our speed. We got quite much of penalties because of the forfait and speeding. The broken coil brought other problems with itself: one of the terratrips was linked to that so it stopped, too, in the other one the beacon broke. The profoundness of ‘Billy’ (Attila Csató) helped us a lot because the tracks were very precisely indicated, as always at his rallies. Today’s long special was not only muddy or puddly but we had to cross three big lakes with 70-100 cm deep water. The water was as high as the bonnet, the ignition got wet and only three cylinders worked. Moreover, the windscreen washer broke down so we had to stop several times to clean the windscreen with our drinking water. One of our main tasks will be to improve the water resistance.’

The first special on Sunday was 29 km long. The Sólyom – Galbács – HAWKIA trio covered the last 5 kilometres practically in idle speed. Because of the rules, the team was able to finish Aqua-Palace Cup successfully and scored 6 points in the general ranking and 3 points in its category.

Olivér Sólyom: ’The suspension is fantastic due to the increase of the track width by 16 cm! You can take the turns consistently at a surprisingly high speed. But on the final five kilometres I went nearly crazy when I heard first a metallic squeak from the car and then loud crackles at each hole. Finally we decided rather not to force it, but brake at each hole and turn to take the HAWKIA to the finish line. We performed beyond hopes and expectations: we finished 7th overall and 5th in the category. I think we have a pretty good car for this year. There are some imperfections yet but at Rábaköz Cup we’ll start with ready car.’

Mátyás Galbács: ‘We made HAWKIA significantly safe and conductible than it was originally. I like its characteristics and I think that if all details are finished it has great potentials. We didn’t sleep too much in the past one and a half month but now it will be easier for everyone because we finished the main part of the reconstruction. I want to say thanks to my family, especially to my wife for their understanding, patience and helpful attitude.’

Viktória Besenyő: ‘I am really satisfied with the weekend. The safest tests are the real rallies when we don’t need to worry about meeting a tractor or some spectators at an unclosed dirt road. Everything worked out luckily for us, the car got ready, we were able to test it and as icing on the cake the team even scored some valuable points for the championship.’ 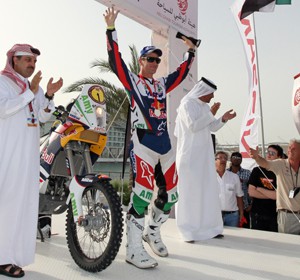