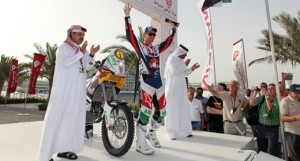 Among the quads, Nicholas Black completed an unlikely victory in his first ever Abu Dhabi Desert Challenge, while the trucks category was won by Eduard Nikolaev in his KAMAZ-Master truck.

After engaging in a titanic tussle for the lead with Russia’s Leonid Novitskiy, the current world champion and the Frenchman’s BMW X3 driving Team X-Raid colleague, Peterhansel piloted his Mini All4 Racing car home in an overall time of 20hours 33minutes 58seconds. Close behind the X-Raid pair was experienced Frenchman Jean-Louis Schlesser in his Schlesser Original buggy.

Having previously won the event twice in the bikes category, Peterhansel revealed his joy at finishing the 1,570-kilometre event and clinching a fourth consecutive Abu Dhabi Desert Challenge win – his fifth cars category title in total. “Our first target was to win and our second target was to test the Mini on the dunes,” said Peterhansel. “We achieved them both, so it’s not bad at all. This is my first victory with Team X-Raid, so it was very nice.”

There was also good news for the UAE, as Emirati driver Yahya Bil Helei and co-driver Khalid Al Kendi took fourth place in the final Abu Dhabi stage in their Isuzu pick-up truck – a result which elevated the pair to fourth overall. Bil Helei, a Desert Challenge veteran, finished the rally in 26h 7m 13s.

“I’m extremely happy to have finshed in fourth position,” he said. “Considering that all of the drivers ahead of me were extremely famous rally drivers, it’s an even bigger honour. The rally this year was very difficult, so my experience with UAE desert rallying was a big help.” 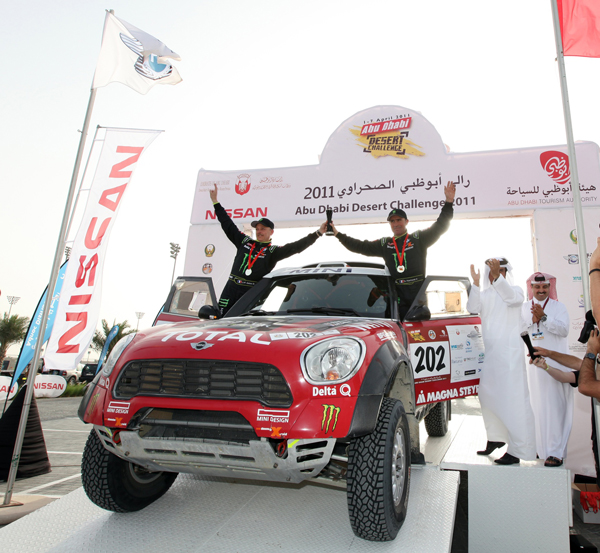 In the bikes, Coma led for the majority of the off-road rally. The Spanish KTM Factory Team rider and reigning Dakar Rally champion steered his powerful KTM 450 across the finish line to complete a resounding fifth Abu Dhabi victory in an overall time of 18hours 28minutes.

“It feels really special to take my fifth win here,” said Coma, who outlined the unique event’s vast desert setting. “It’s never easy, especially this year, when there have been some very good riders. I’m really happy for this victory because Abu Dhabi is a fantastic place. I like this rally and I like the people who are involved. We know the desert is really special. The conditions are always hard, with big dunes and soft sand, but it really is fantastic.”

After disturbing the head of the field with a pair of stage wins during the 1,570kilometre race, Dubai-based Sam Sunderland, finished 42nd overall following the severe mechanical problems that ended his own title tilt on day three.

Over the course of this year’s Abu Dhabi Desert Challenge, the Emirati quad duo of Mohammed Al Shamsi and Atif Al Zarouni had looked odds-on to gain a one-two for the UAE, with both riders taking convincing stage wins and leading well going into the final leg. However, mechanical problems plagued both riders on the final day, allowing Black in to snatch his victory in his first ever Desert Challenge.

Speaking after the rally, the Briton said: “I really didn’t know what to expect coming into it. It was really tough. I went past Atif 80 kilometres after the start and Mohammed about 80 kilometres from the end, so I didn’t know I’d won the whole rally until the finish.”

The KAMAZ-Master trucks provided huge excitement and entertainment this year, as they returned to the rally for the first time in three years. With three trucks entering the race, and only two completing it, it was Eduard Nikolaev who prevailed in his 12-tonne truck overall, 5h 46m 18s ahead of teammate Andrey Karginov.

Russian rally star Nikolaev had been part of a winning trucks team in the Desert Challenge previously, when he was in the team led by world record holder Vladimir Chagin in 2005. His team was completed by two of his compatriots, Viatcheslav Mizyukaev and Vladimir Rybakov.

The Abu Dhabi Desert Challenge is one of the world’s top cross-country rallies and continually attracts some of the most famous rally drivers and riders from across the globe. The event is organised by the Automobile and Touring Club of the UAE (ATCUAE) under the title sponsorship of ADTA, and is held under the patronage of HH Sheikh Hamdan Bin Zayed Al Nahyan, the Ruler’s Representative in the Western Region.

It is backed by a high-profile line-up of sponsors and supporters that includes Al Gharbia, ADNOC, Rotana – Yas Island, Al Ain Water, TAG Heuer, Explorer and Nissan – the all-terrain Nissan Patrol, dubbed ‘The Hero of All Terrain’, is the official vehicle of the Abu Dhabi Desert Challenge. 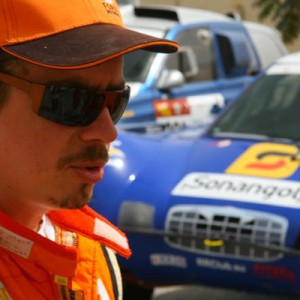 The cars all lined up at the Yas Marina F1 circuit can mean only one thing; the 2011 Abu Dhabi Desert Challenge has come...
Copyright 2011-2016 Rallyraid.net - RISE Network. All Right Reserved.
Back to top