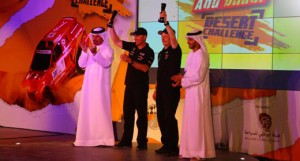 The cars all lined up at the Yas Marina F1 circuit can mean only one thing; the 2011 Abu Dhabi Desert Challenge has come to an end. It has been an incredibly difficult event, as the pieces of missing body panels from several of the leading cars testify to… pieces of bightly coloured galssfibre left out in the desert for a camel to ponder…

Last evening, after losing 20 minutes in just one stage, Novitsky had only one ting to say about his plan for today. “Maximin attack,” he said and by the state of his stoved-in front bumper on his X-Raid BMW the evidence of his effort was clear to see. “We tried hard,” he said, “We were leading at te 1st CP, but then the track became very technical… it was so difficult that we couldn’t really attack…”

It was Schlesser who came away with the stage win, but he also admitted that it was hard. “The big winds blew the sand off the tops of the dunes which made them look as though they were bigger… so you power up them and bumph… you are too fast and in the air… That’s why we lost the front wing.”

Peterhansel was near by and said, “It was a very fast stage but I didn’t push too hard because it’s so easy to make a mistake. But no one came from behind so I knew that we had enough time…”

Novtsky, gracious in defeat, added, “We had a good rally. It was very hard with every single section almost as difficult as it could possibly be, but 2nd is a good result.” Indeed, against Peterhansel, a man with 7 Dakar victories to his name, 2nd is a result in no way to be ashamed of.

About the Mini Peterhansel said, “Whenever you get behind the wheel you want to win, so for me it was a perfect rally. We had a lot to evaluate on the Mini and this week we learnt a lot about the development of the car. So with this win we can really see the potential it has.”

Just before everyone departed for te podium I managed to catch up with the legendary but elusive John-Louis Schlesser and asked him what he thought of the event and if he was happy with his 3rd place. “It’ a really hard event, especially because it is so hot. And because each stage is so technical I think that maybe they are a bit too long. But 3rd is a great result… don’t forget that I am 2 wheel-drive, so 3rd is not so important, 1st in class is! About the event? Well, I can say that it’s wonderful. It’s always wonderful to drive on dunes and here in the Desert Challenge are some of the hardest in the world. I love it!”

Fadi Melki was looking a bit tired at the finish. “I don’t know why they changed the dates from October to April because now it is so hot,” he shrugged after finishing 10th for the 2nd year in succession. But he was happy with the result. “Without our problems we could probably have been 6th or 7th, but at least we have third place out of the local Gulf paricipants, so that’s somethng to be happy about!”

Standing nearby was the eternally laid-back Mark Powell who looked remarkably fresh considering he’d just been racing in one of the world’s toughest environments for five days straight. “Today was fast which is not the Buggy’s strongest point but then it was really hard technical stuff because in the white sand you can see almost nothing, and this is the reason we got stuck twice. You just can’t see enough to judge your speed and angle correctly.”

There is no treasured trophy to set on the mantlepiece for prosperity but the Rallyraid.net Hero of the Rally goes to the one and only Saeed Al Hameli, the guy who drove he whole rally single-handedly in his heafty Nissan. He didn’t quite get the satisfaction of getting across the finsh line though as with a few kilometres to go his Patrol didn’t want to go any further and gave up. “He is just like a stubborn camel!” he smiled, but had done enough to earn the respect of just about every other competitior.

At last Russia’s Boris Gadasin made it through a stage and got to Yas Marina with a smile on his face and his assistant team manager Marina translated what he had to say, “I will leave Abu Dhabi happy because the result of the experience of being here and getting so much experience drving in the desert is much more valuable to me than the result on the timesheet.” 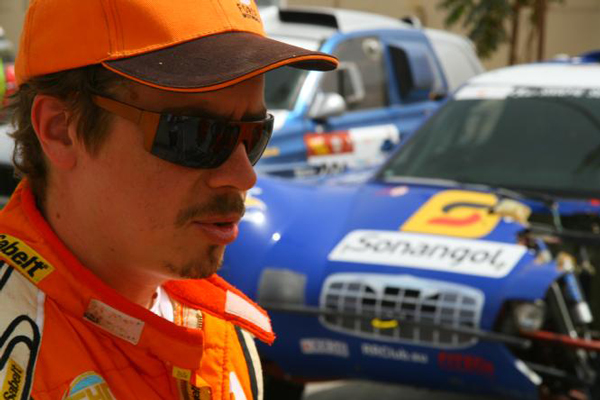 And finishing off their week of bad luck and incidents were the Dune Raider team in their Classic Range Rover, failing to get the engine started from the car park to the podium. “We think we’ve chased the problems to a fault with the ECU not wanting to communicate properly with the injectors,” said one of the friendly mechanics. “But it’s easier to say that in the car park than before a 350km stage…”

And so in the suffuce lights in the garden terrace of one of the hotels the thank yous and awards were handed out. The ubiquitous pretty girl in high heels and a tight dress handed out the trophies to the aplause of those who mostly had no idea what the men waving aloft their trophies had gone through over the past 5 days,the level of concentration, skill, stamina and determination in the crushing heat of one of the harshest environments known to man.

And now the championship moves on, to the OiLibya Rally of Tunisia in three weeks time. Most heat, more sand, more stuggles… and more heros. 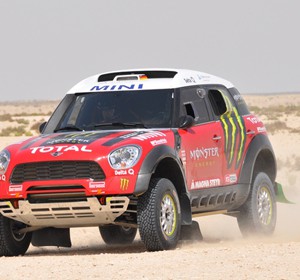 The Monster Energy X-raid team celebrated an historic success in the five-day Abu Dhabi Desert Challenge, which started on April...
Copyright 2011-2016 Rallyraid.net - RISE Network. All Right Reserved.
Back to top