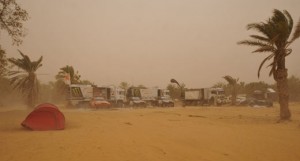 Originally planned over 208 kilometres south of the oasis of Ksar Ghilane, the 2nd stage of the Oilibya Rally of Tunisia 2011 has unfortunately been cancelled this morning due to weather conditions prevailing throughout the region. After hoping for a moment to at least run a shortened version of the special number 3 (a 50 km dash) the organizers had to abandon that project too. According to the latest available weather reports, a lull is scheduled for tonight. The race should be back on tomorrow, hopefully under a blazing sun…

Swept by an intense sandstorm just before sunrise, the bivouac of the Oilibya Rally of Tunisia took on the appearance of a desert camp. In these near-zero visibility conditions it was pretty obvious that today’s stage would not be disputed. All competitors were informed at the general brief at 7:00 am, nevertheless the organizers decided to try out part of a 50 kilometres stage, just north of the oasis of Ksar Ghilane. But by 11:00am, the hour of scheduled departure for motorbikes, the wind doubled in intensity. For obvious safety reasons, it was then decided to renounce any sporting competition today, all the riders turned back, and under escort, in convoy came back to the camp of Ksar Ghilane…

INTERVIEWS
Stéphane Clair (Organizer) : “We did the best we could. Given the wind conditions and the visibility, hoping for a lull in the late morning : we had traced a loop using tomorrow’s Road-book of stage 3, of course bearing our number one concern in mind : Safety ! But the weather did not let us play today in this beautiful setting. If one is to believe the weather reports tomorrow morning looks OK.
I think everyone was finally quite happy not having to face the storm on the tracks I hope the wind will calm down now so that the camp goes back to normal. Tomorrow: is a big day, one that was originally scheduled today. Provided, of course, the meteorologists are right, and that we have clear skies tomorrow … Inshallah, as they say here … ”

Francisco Lopez (Chi / Aprilia 450 No. 1) : “It would have been too dangerous to take the start, even a shortened race under such conditions. Whether it’s a race of 200 kilometres, as originally planned or a loop of 50 kilometres, finally it does not change much. I am patient, and hopefully tomorrow everything should return to normal … ”

Jakub Przygonski (Pol / KTM 450 # 15) : “To me it’s a great decision because the storm was really strong and the sand was like a thick fog. And, this stage was very fast, so I think it was better to cancel in these conditions …”

Brunod Andrea (Ita/ BMW 450 No 10) : ”I am a recent fan of Rally Raid, in fact I only started last year and did well at the european Baja !I have come to Tunisia a few times and even my girlfriend is Tunisian, so you can imagine how confident I felt coming here ! Unfortunately on the first special I hit gear problems at KM 160, today sand in the fuel tank, 10 mns from the start! Lucky the race got cancelled really! I am definitely ready for tomorrow!”

Jean-Louis Schlesser (Fra / Buggy Schlesser No. 300) : “I think it’s a justified decision. The Organizer is solely responsible for us and I think he did very well not make us leave for this special because there was no safety possible as the helicopter was unable to take off under these conditions. This is part of the charm of the desert, it rarely happens, but it happens. It gives us a bit of spare time to have a drink and a chat with all our friends…”

Tobbias Quandt (X-Raid Team manager): “For us, the organizers have made the best decision possible. Safety is a priority. Of course our pilots would have liked to go, but they understand the situation and fully share our position …” 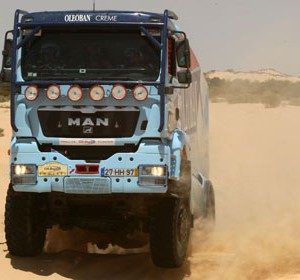 Elisabete Jacinto was brilliant at the start of the 30th edition of the Tunisian Rally, a competition valid for the Cross-Country...
Copyright 2011-2016 Rallyraid.net - RISE Network. All Right Reserved.
Back to top