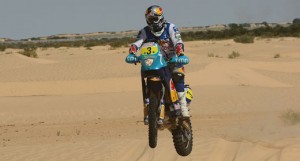 Tracing through263 kilometers between Tozeur and Ksar Ghilane, the first stage of the Oilibya Tunisia Rally 2011 has already put men and machine to the test. And if the winners of the day, Portugal’s Helder Rodrigues (Yamaha 450 No. 3) in the bike category and the Novitsky / Schulz team (BMW X3 CC No. 301), fared rather well, many behind them have sweated blood and tears to reach the southern Tunisian paradise of Ksar Ghilane.

No place for the unemployed on this Labor Day! Those who did not believe Stéphane Clair at the briefing on the eve of the first stage have had to face the evidence today! On this first stage between Tozeur Ksar Ghilane: the 30th edition of the Oilibya Rally of Tunisia started very tough indeed! Chains of particularly soft dunes, very sharp navigation skills required and already scorching temperatures: the entire ingredient there to make for a demanding race.

Neither Francisco Lopez (Aprilia 450 No. 1), nor Helder Rodrigues (Yamaha 450 No. 3) would argue with that! Leaving ahead this morning (as required by regulations), the Chilean rider, last year’s winner, opened two-thirds of this challenging stage before being joined by his Portuguese counterpart … It is a navigational error of the “Chaleco” , as he is known , ten kilometers from the finish that made the difference, Rodrigues rewarded with a first victory in the scratch.
Behind the two leaders, the Polish Jakub Przygonski (KTM 450 No 15) hoped to profit from his starting order (8th) to give us the surprise of the day. Alas, here too, a navigational error would destroy his hopes, forcing him to settle for third place. More annoying, however, fuel trouble encountered by Spaniard Jordi Viladoms (Yamaha 450 No. 4), his bike, stubbornly refusingto restart for almost half an hour, just after CP3, opening wide the doors of the top 5 for the Polish Czachor (KTM 450 No. 5) and Dabrowski (KTM 690 No. 100). But the feat of the day on two wheels is to the credit of the young French Thomas Bourgin (Husaberg 450 No. 253). The 7th fastest time of the day, The man who comes from St Etienne, suffered a heavy crash on the Africa Eco Race (pelvic fracture), immediately seized the head of the Enduro Cup ranking, reserved for series motorcycles.

Bad day, for Pascal Delesque (No. 260 Honda) Quad… Accumulating troubles on his new Honda, the French pilot was forced to leave the tracks and return to Ksar Ghilane by road, letting Russian Dmitry Pavlov (No. 200 Honda) take command of the race, temporarily…

Helder Rodrigues (Por / Yamaha 450 No. 3) : “It was very tough for a fist leg. The navigation was not easy and the dunes were very soft. I got stuck in a dune and it took me two minutes to get the bike out ”

Francisco Lopez (Chi / Aprilia 450 No. 1) : “It was really superb. I opened for the first 200 km. Then Helder and I rode together and I got lost 10 km from the finish. The navigation was difficult. ”

Jakub Przygonski (Pol / KTM 450 No. 15) : “Starting eighth, I ate a lot of dust !!. Then I rode often alone, but it was not obvious. I thought I could succeed the fastest time today, but I got lost for a minute to a few kilometres from the finish … ”

Jordi Viladoms (ESP / Yamaha 450 No. 4) : “It’s such a shame. My bike stopped, probably due to problems with the fuel supply. I had to wait for 20 minutes before being able to start up. Then, the engine hiccupped all the way back, and I rode the final 50 kilometres in what seemed like slow motion… ”

Thomas Bourgin (Fra / Husaberg 450 No. 253) : “The sand was soft, but less than in Mauritania during the Africa Eco Race. That’s why I’m pretty much taking it easy. My hips (following a fall during the Africa eco race) is still fragile, so I drove carefully to avoid falling over … ”

Anis Nabli (Tun / KTM 450 No. 103) : “My ICO broke down after 60 km. Fortunately, I am Tunisian and i hold the record of participation in this rally Oilibya Rally of Tunisia (Editor’s note: 13 times), and that helped me to find my way out. I am getting to know the tracks in this area pretty well !.

Pascal Delesque (Fra / Honda Quad No. 260) : “I had some problems with the wheels before departure. After 76 km of special, the navigation instruments broke down. I was forced to take the road to the finish. I’m gutted! No chance to win the rally, but I hope to win a stage at least! “

Novitsky-Schlesser: Duel in the sun! Let the battle begin... 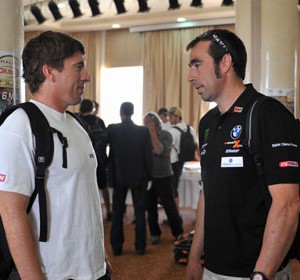 Double Dakar winner, triple winner of the Africa Eco Race and six-time winner of the Oilibya Rally of Tunisia, Jean-Louis...
Copyright 2011-2016 Rallyraid.net - RISE Network. All Right Reserved.
Back to top