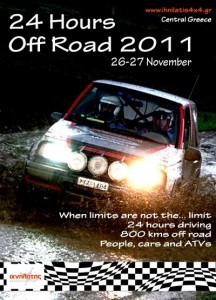 A 24 Hour Off Road competition event for off road vehicles. It is held in central Greece, few kms from Athens. This is the 8th year of the endurance adventure event. It is held over four loops, each one ending with a service of 90 minutes. The event is taking place on the last weekend of November, for this year 2011 at the 26th and 27th of the month.

In 2008 year the event had 111 competitors from 4 countries. One year later 2009, Borris Gadasin, World Baja Champion, took part at …the event. This event was sponsored by Cooper Tyres and City of Pireas, Greece. In 2010 competitors from Bulgaria, Roumania and Slovenia made the event  international.

Rally (T1 and T2) and normal cars are accepted. Total length is about 800 kms. Driving time 24 hours, non stop! Starts Saturday 12:00Z. Ends Sunday 12:00Z. The terrain consists of many types of gravel. From fast, wide roads up to difficult, mud paths and twisting mountain roads. From zero altitude, up to 1500 meters, on the rocky mountains of Central Greece. During day and night, close to the biggest night in the area, that lasts for 14 hours.

Foreign competitors don’t have to pay administrative cost. And the transport and accommodation can be arranged with low prices, if requested to the organizer.

For European competitors 4 days are enough for coming, racing, return to base. Ships from and to Italy depart every day. Athens Airport is just few kilometers from the start. Scrutinizing is held just before the race, Saturday morning, for foreign competitors.

More info can be found on the organization website 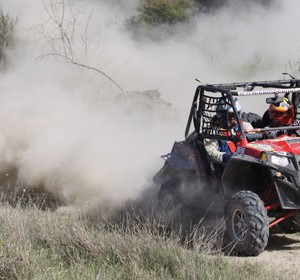 After having missed out on a Volkswagen contract, Thierry Magnaldi left the rally world for two seasons. However the former...
Copyright 2011-2016 Rallyraid.net - RISE Network. All Right Reserved.
Back to top