Into the Wastelands of Perdition 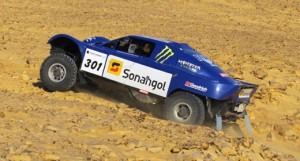 Now at 3 days done out of 5 today’s fast 310km stage reached and passed the event’s half way point through some of the most breath-taking scenery. High up on on a ridge overlooking the start we looked out over the stark lunar landscape watching as the crews took a run up to make the steep sandy slope to the sharp rocks scattered on top. Jean-Louis Schlesser was first away and his rear wheel drive buggy wasn’t at such a disadvantage but it was Boris Gadasin who was obviously on a mission, airborne several times before he hit the sandy ramp and roared off in pursuit of the legendary Frenchman… and catch him he did, in just a handful of kilometres… until the sharp rocks sliced a tyre…

“I let him go,” said Schlesser, “Because in such places you have to drive tactically. The stones were hard, we were banging over them, but it’s important to know where to drive fast and where to drive more carefully… and voilà in the rocks is where we found Gasadin with a flat tyre.” 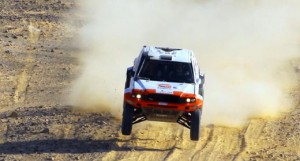 In the desert experience counts for a lot, as Gadasin found out to his cost. He passed Schlesser quickly, but it didn’t take all that long to get a puncture either. “But when we started again,” the Russian explained, “we just sank straight down into the sand. We had to use trackmats to get us out a couple of metres at a time and it cost more than 20 minutes. And as we were putting them back on the car I looked back and there was a large circle of very fine white sand… and I pulled off the track and parked right in the middle of it!”

But worse was coming for his team mate, the former leader Vladimir Vasiliev. Like Gadasin he was pushing hard, keen to learn the limits of himself and his car before a possible attempt at the Dakar and did just that… “We came down off a large dune and at the bottom there was a sharp turn into a rocky gully which wasn’t marked in the roadbook…” he shrugged.   “It almost caught me, as well,” Boris added, but Vasiliev ripped the whole front suspension off the front of the car. “If there’s something positive to say,” he said, “It’s that the T4 crew managed to fix it in just 2 hours! And then we carried on through the rest of the stage! We’ll start again tomorrow.” 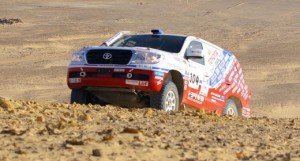 With his car looking as immaculate as it did in scrutineering it seems that Jun Misuhashi is just popping out for a picnic every day, but the time sheets tell a different story; in his T2 Land Cruiser he is 2nd overall. “It was a very fast stage today and because of that I expected the G-Force Protos to catch me quickly… and they did. But then I saw them both stopped and it after that it was hard to keep concentration, because I was thinking about the result… The sand was nice to drive on after all the rocks  but the car is not so fast… but it’s not so slow either and now I am looking forward to the big dunes on day 5 because that will be my real chance to beat the G-Forces… because only if they have problems…”

After yesterday’s nasty accident with the BMW today Costel Casuneanu had more mundane problems to deal with. “So many rocks!” he said from his mattress in the shade of his service truck. “We blew 2 tyres very soon. We started far back because of yesterday, but overtook 4 cars in the first 3km… but then they all got back passed us again while we were changing the wheel… so we caught up with them again… and the second tyre went… And when the last one started to go down we decided to put the pressures up to 3.5 bar… and had no more problems, even on the dunes it was OK.” But his shoulders and chest looked anything but OK. “And the other problem I have is with the HANS device, it presses on me too much,” he said gently touching the red and raw skin.

One of the pre-event local favourites was Tarek El Erian in his striking Porsche powered buggy, but a broken reverse gear on the first stage cost them masses of penalties. “But today it was all working well and we got sixth on the stage. Not bad for our Bat Mobile!” he smiled. “The team name Rahhala comes from the ancient caravans that used to cross these deserts in the old times, and it’s more about the experience of going to different places rather than the speed.” 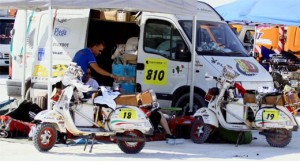 One of the strangest things at the start line were the pair of Vesper mopeds. I didn’t see them for a couple of days, but with scratched paint work and the team zonked out under their tent, they are still going. “Not so fast,” said Andrea Revel Nutini with a smile, “But we go. On the rocky tracks they go faster than we thought they would… but on the sand they go worse… Yesterday was great, we did 200km before we ran out of time because it was dark, especially because many people thought that we were just joking! Yesterday there was a track between the rocks that was soft sand, which we are not so good on. So we went up on the rocks and found a way up there and the photographers were all shouting ‘Why are you half way up the mountain, the track is down there!’”

Now the organisers are giving the briefing, but with all the ‘Do not’s’ it has the ominous feel of some strict religious sermon. Attendance is obligatory with crews names being checked off a list to make sure they are here. “Thou shall not enter the desert with a dirth of water!” and “When you shall find yourself at Km266 thou shall not take the path of least resistance but shall continue on the path that will surely lead you to trials and tribulations…”

This morning, Thierry Magnaldi took the start with his RZR some kind of anxious. After only a few kilometers the Xtreme+...
Copyright 2011-2016 Rallyraid.net - RISE Network. All Right Reserved.
Back to top