Vladimir Vasiliev wins the first stage of the Pharaon’s Rally 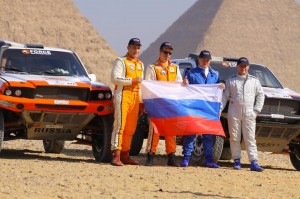 Of all the places in the world to start a motorsport event, having the Pyramids of Giza as the backdrop must surely be one of the most prestigious. In the soft early morning light they were a breath-taking sight and all the crews found a little place on the dusty plateau near the podium to take a team photo.

First to drive under the inflatable arch was legendary rally raider Jean-Louis Schlesser, as the the reigning champion and current FIA World Cup for Cross Country Bajas points leader Leonid Novisty is in Morocco with the X-Raid team preparing for the Dakar.

Behind the blue buggy were Miroslav Zapletal in an X-Raid BMW X3CC and  Russian Boris Gadasin in his G-Force Proto both keen to carry on their rivalry from the last round in Hungary. There were no crowds of spectators though as access was very restricted, just a few bored looking camel-mounted policemen ambling around chasing away the cheeky postcard sellers. 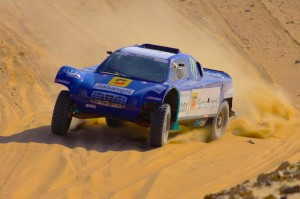 I was with Saeed Al Hameli, who some might remember as the one-eyed wonder from the Abu Dhabi Desert Challenge when he finished the first stage in 6th place… without a co-driver, and after a 300km blast through the desert east of Cairo in his massive Chevy Duelly we found an excellent view point near the finish. The wide valley was strewn with fearsomely sharp bits of shale and the steep hills either side needed a lot of careful negotiating. It was perhaps not too surprising to see Schlesser appear over the horizon first, a few sharp bursts of his 7 litre V8 ringing out over the still desert air and then a long time on full throttle as he blasted across the plain, pulling up a huge rooster tail of dust behind him. He wasn’t fastest today though. 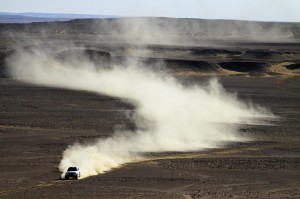 Then there was a long wait for Zapetal and he was noticeably calmer across the valley, backing off over the jumps and struggling up the slope next to us because he didn’t have enough momentum… but there was a reason for that… “X-Raid are in Morocco,” Miroslav said back at camp. “All of X-Raid.” His team consists of a pick-up with a trailer and a mechanic… “So we need to take it very easy on the car.” Also, his co-driver Tomas Ourednicek has the flu. “It’s a disadvantage,” he explained. “I’m not so sharp and the track was constantly bumpy… and it was a 500km stage…” 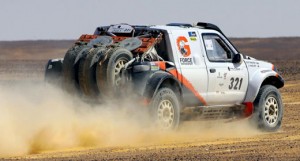 The next car to come into view wasn’t a G-Force as we were expecting… it was a T2 Land Cruiser, but through our telephoto lenses we saw them pull over to fix a puncture, just 1 km from the finish. The driver was Japan’s Jun Mitsuhashi and he wasn’t too pleased with his day. “We were expecting more sand so we had the tyre pressures a bit low… and it was all rocks, so we had two punctures. And also, the last time I drove was in the Dakar 10 months ago so I am a bit out of practise… oh, and my seatbelt came loose, so it was hard to keep concentration… Tomorrow will be better.” Just then one of his team guys came in with the provisional results. “Fourth,” he shrugged. “Tomorrow I will be hoping for a better result.” 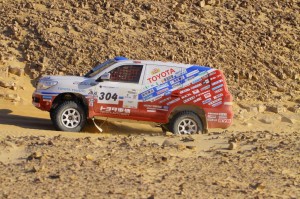 But he did beat Boris Gadasin. His monstrous 7 litre Corvette V8 dropped a couple of cylinders about 5km after the start and the loss of power cost them over 27 minutes. Back at camp Boris was understandably disconsolate but his new team mate Vladimir Vasiliev was in a better mood… he won the stage. “Everyone always tells me, drive slow on the first stage, so I did. I was just taking my time, I even stopped at service… just to say hello to the mechanics… But the stage wasn’t so hard. Tomorrow will be a lot of sand, a lot of dunes and we never raced there so we will just go there to learn.”

And Schlesser wasn’t too upset to be second. “It’s always hard to open a stage as you have no tracks to follow… well, you have the mess that the bike leave, but it’s not very helpful. A few times we had to turn around as the hill was very rocky and we didn’t know what was at the top, but tomorrow will be much harder,” he said with a smile. “So I don’t think that the result will be the same…” 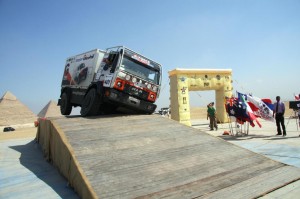 But Valiliev’s stage victory wasn’t G-Force’s only moment of fame today. Their T4 truck stole the start show… by destroying the podium! It wouldn’t fit under the inflatable arch so some bright thinking official pointed them up onto the wooden ramp next to it… Team co-director Marina shrugged her shoulders and said, “You do what the officials tell you…” and the result was quite inevitable… and highly amusing. First one wheel snapped a plank and then the rest of the 7 ton truck fell in and by the time they’d worked themselves out there was nothing but a pile of timbers left!

As I write this I am in the press centre in a huge Arabic style tent and the organisers are repeatedly telling everyone that tomorrow’s stage will be very hard and that crews won’t be allowed to start unless they have enough water on board. Schlesser has 30 seconds to pull back, which is a split second in rally-raid terms. I’ll be out with Saeed again somewhere in the dunes under this ancient sun and I’ll have some time to catch up with some heroes of the event… like those tackling the stages on a pair of Aprillia scooters…

Hard first stage for Thierry Magnaldi and his Polaris RZR 900 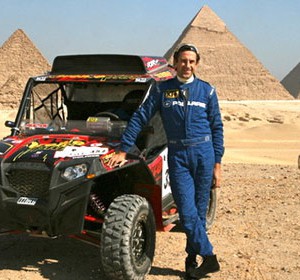 Hard first stage for Thierry Magnaldi and his Polaris RZR 900

The day was announced to be as terrific as the weather at the start of Pharaons Rally next to the Giza Pyramids, but “miss...
Copyright 2011-2016 Rallyraid.net - RISE Network. All Right Reserved.
Back to top