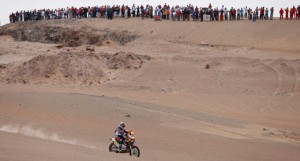 Cyril Despres went into Stage 11 of the Dakar Rally on Thursday with the slimmest of overall margins just 21 seconds ahead of KTM factory teammate Marc Coma. At the end of the 534 km timed split section, Despres was first across the line and had extended his lead to 2 minutes 22 over his rival.

Given that the race is around 9000 km and there are still three stages to the finish, the competition is still wide open.

The two KTM riders, who are more than an hour in front of third-placed Helder Rodrigues of Portugal, are both aware that the slightest mistake can cost them their fourth title in the world’s toughest rally.  They have also now both won four stages each in this edition. Other KTM riders in the forefront of the action in today’s stage were Gerard Farres Guell of Spain who was just 1 minute 39 behind Despres in second place and Johnny Aubert, KTM Enduro factory rider, competing in his first Dakar Rally on a series model KTM 450 Rally Replica bike. Farres led the bikes for much of the day and Aubert had his best ever day so far finishing fourth in the stage.

So with the two lead riders so evenly matched, from the same team and riding the same factory bikes it is now largely a matter of tactics. Coma and Despres finished 2-3 in yesterday’s stage so Coma went out first. Despres shadowed his opponent all day and only went into the lead in the last part of the ride. It was the Frenchman’s thirtieth Dakar stage victory.

Despres said today was all about attacking. ”In the beginning there had been a modification to the road book and the tracks weren’t very visible. I rode 100 meters too far but then I saw Marc was turning round, even though he started two minutes in front of me. The day was a tough one and started with pushing the bike through a stream. It could be an important development to have someone between Marc and me. With Farres at second it’s not good for me. Tomorrow will be complicated, but anything can happen on the Dakar.”

That is exactly what will happen tomorrow on the second of four stages in Peru. Despres will have to open the road as the first out of the start gate, then Farres Guell, a friend and Spanish colleague of Coma’s will go off two minutes later setting up a possibility for the title holder to quickly gain on Despres. Coma will also be assisted by Aubert who moves up to be his support rider after his water carrier Joan Pedrero was forced to withdraw after Stage 10. 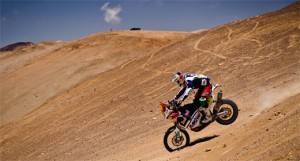 Coma again underlined that he was prepared to do whatever it takes to pull off his fourth title. “Today we had a mixture of several types of terrain. It was fast hard packed earth, sandy and stony. It was predictable that Cyril would gain time on me today but I’m going to try my utmost right until the end. There are three days left to give it everything.” He was evasive regarding tactics saying: “It’s difficult to define a strategy when Cyril is riding flat out in front. I’ll just have to follow him. It won’t be flat out, but the pace will again be quick, like it has been since the beginning of the race.”

Third placed Portugal’s Helder Rodrigues lost time stalling at a river crossing in the early part of the special but still has a comfortable lead over fourth overall, KTM rider Jordi Viladoms of Spain. Rodrigues is one of only two non-KTM riders currently in the overall top ten. Despres’ water carrier, Rubin Faria had some navigational problems in the early part of the timed special and eventually finished back at 38. He is currently twelfth overall. 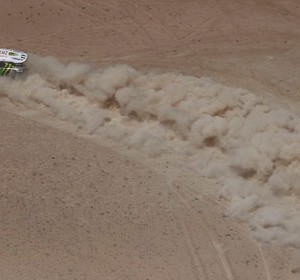 The countdown is running – just three more days to go to the Dakar Rally finish at Lima. In the 11th of the 14 special...
Copyright 2011-2016 Rallyraid.net - RISE Network. All Right Reserved.
Back to top