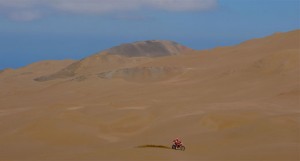 The Dakar left Chile behind and its party arrives to Peru. The crowd was there on the tracks for this first edition at the Inca´s land. The atmosphere was warm all along the road, very beautiful, that took the rally to Arequipa, except for bikes and quads that had their marathon stage, which means no assistance is allowed, and stop 150 kilometers away, at a small village.

The stage was once again divided in two, separated by a neutralized section of 130 kilometers. Jes Munk was again able to manage the difficulties of the day and finishes 43th and continues his way to Lima.

In the first part of the special, competitors crossed two “oueds” (rivers) quite deep. “While arriving to the first river, very deep, I saw many riders on the other side with the bike dismounted because they felt into the water. I walked pushing the bike, but I stopped in the middle and waited for someone to help me. I didn´t want to fall like Faria, Duclos, Farres, the Yamaha bikes…” explains Jes to his assistance that waited for him in the road to Arequipa.

The second part was totally different. “There were mountains, a canyon… it was beautiful! Also the dunes… amazing! I had fun surfing on the sand! But also, there was a very hard downhill, with fesh-fesh deeper than 50 centimeters… It was terrible! I had a fall and among this sand soft as baby powder, my bike just disappeared! But there is only one thing that matters: LIMA!”

Tomorrow, the start of the special stage is moved 49.66 kilometers due to two rivers that are impossible to cross. 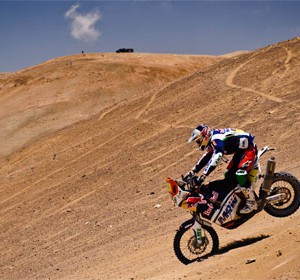 Cyril Despres went into Stage 11 of the Dakar Rally on Thursday with the slimmest of overall margins just 21 seconds ahead...
Copyright 2011-2016 Rallyraid.net - RISE Network. All Right Reserved.
Back to top