Over a hundred competitors – bikes and quads – for the third round of the FIM World Cross-Country Rallies. The Sardegna Rally Race blew the counter of the organizing club, Bike Village.

A good reason for Antonello Chiara and Gianrenzo Bazzu, co-directors of this entity, for to be satisfied. These two ‘GO’ (gentle organizers) where forced to move the date of their Rally, but have not lost their ability. All competitors received with warmth and simplicity were welcomed at a new magic site, still in San Teodoro, but at the Paradise Resort. This brand new area located at Punta d’Aldia, is a simple beauty.

If the real start of the Rally will be tomorrow the first, loop stage, the first day in San Teodoro was simply exciting. Only the technical scrutineering in the program, but before each player will lance himself in the fifth edition of the Sardegna Rally Race, a warm “party” day has been spent in the very special atmosphere of a great event.

Cyril Despres Team
For family reasons, Cyril Despres, that was the first to commit to the Rally, will not be there. This is the melancholy that the Franco-Andorran can not participate in his favorite rally after his twice winning score (2008 and 2009).

‘Peter’ is back!
The recurrence of Stéphane Peterhansel, fourth last year, suggests that the recent winner of the Dakar in a car, does not came in Sardinia to come down into the hierarchy, but instead to go higher! Marc Coma (KTM 450) knows that he will must be concentrated facing the World Champion Helder Rodrigues (Yamaha 450) or the Pole Jakub Przygonski (KTM) but also that French devil and his Yamaha 250 WRF. A small machine, light and maneuverable allowing the brand ambassador to sneak with agility on narrow trails or in the undergrowth mountainous interior of Sardinia. 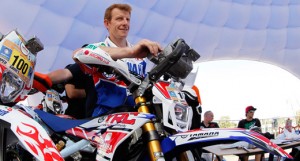 The return of David Frétigné
French David Frétigné had never come to this island. It is also his return to the discipline since his accident in Brazil last August. This is a ‘new’ returning, and David showed a perfect shape. After having spent two seasons with Husqvarna, the French talent is finally back with a Yamaha. “I’m as happy as a kid who made his return to school. I found all my friends, in the paddock of the Rally anche at Yamaha, and the essential of my participation to rebuild myself”

It will be the third victory for Marc Coma?
Winner at Abu Dhabi Desert Challenge and then, in Qatar, the Spaniard Marc Coma aims for three in a row this season. As the World Championship leader, the Catalan ambition this season is to achieve the grand slam! The answer next Thursday!

Italians in strength
Certainly, there are so many Italians to compete in the round ‘almost’ home, but two names stand out: Matteo Graziani (KTM) and Andrea Mancini (Beta), that distinguished itself in 2010 after finishing second rear Cyril Despres.

The Portuguese rising
And there is the young Portuguese Joan Barreda, a lot of attention following him since the end of last season. His teammate and countryman, Paolo Goncalves will not be outdone. Both are conducting Husqvarna.

Others …
Not to mention the Spanish rider Jordi Viladoms, one of the sharp swords of the Ferrari-Bordone Racing Team, or the binomial of the Team Orlen, Jakub Przygonski and Marek Dabrowski … would be an insult! Many other competitors have good things to play every day, according to their feeling with the ground.

Defending champions in the car category, Team X-Raid today announced it will not take part in the 2012 Silk Way Rally. A regrettable...
Copyright 2011-2016 Rallyraid.net - RISE Network. All Right Reserved.
Back to top