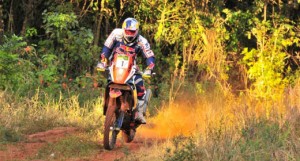 The Desafío Litoral competitors had to make a big effort to battle the difficult weather conditions that appeared on the second day of race. The heavy rains affected the ground conditions of the province of Misiones and that is why the organization decided to finish the second stage of competition in the kilometer 195 of the special stage, with the aim of protect the safety of the drivers.

The winners of this short but exiting day were Cyril Despres in Bikes, Nani Roma in Cars, Sergio Lafuente in CUADS 4×2, Daniel Mazzucco in CUADS 4×4 and Omar Yoma in UTV.

The story of the day:

The fight for the victory in Bikes was between Cyril Despres, Francisco “Chaleco” Lopez and the Polish Jacub Przyigonski. This time, the Frenchman was the winner of the day. He overcome several falls to win his first stage in this Desafío Litoral and to became the new overall leader.

With more than six minutes late, “Chaleco” Lopez took some precautions and he was relegated to third place in the day and overall classification. The new second is Przyigosnki, who is over four minutes behind the leader Despres. The Argentinean Mauricio Gómez is the new fourth while Jeremiah Israel the new fifth.

Another shocking notice during the day was the retirement of the Polish Tedeuz Blazusiak. “Teddy”, who yesterday had a very good start in his debut race in Cross Country Rally, couldn’t complete the stage after falling on a curve.

Meanwhile, Sergio Lafuente showed his great skills riding a Quad in the 195 kilometers played today and won the second consecutive stage in the Quads 4×2 category. The Uruguayan could recover after a fall, and reach the bikes of Cyril Despres and Francisco López and ratify his leadership in the category of simple traction. Second of the day, Francisco Bartucci, finish just 22 seconds behind Lafuente but this result does not allow him yet to reach a place on the podium. 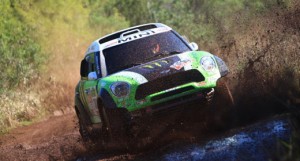 Nani Roma is the new leader in cars. The Spanish could recover from the problems that he had yesterday and won this stage over the Argentinean Orlando Terranova. These two drivers are fighting for the first place of the race, now it’s up to Roma with 1m 32s over Terranova. Third in Cars category remains the Chilean Boris Garafulic, although he has more than one hour late behind the leaders.

In the Quads 4×4 category, the leader is still Daniel Mazzucco. The rider from Córdoba managed to overcome the difficulties in the field today and could make a 17 seconds difference over the second, Pablo Bustamante, who remains at the second position overall, 26m 59s behind Mazzucco. Third overall is Ezio Blangino, who recovered positions and climbed to third overall provisional.

Meanwhile, in the UTV category, Omar Yoma is still leading the following actions. The driver of La Rioja won today the second stage of the competition and exceeds Juan Depetris and Jose Blangino, respectively second and third. 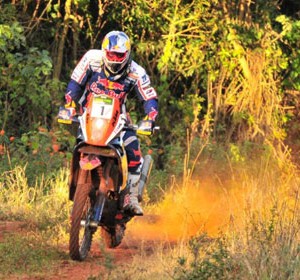 KTM’s Cyril Despres emerged as stage two winner and has taken an early lead in the overall standings on the second day of the Desafio...
Copyright 2011-2016 Rallyraid.net - RISE Network. All Right Reserved.
Back to top