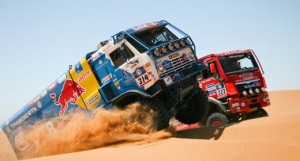 With just one week before the start in Moscow’s Red Square on July 7, the competitors of the 4th edition of the Silk Way Rally are ready to get on with the business. More than 100 cars and 25 trucks will set off on the 4000km route, featuring 2092.64kms of timed sectors. And one thing is sure: it is going to be a rally-raid to remember with one of the most competitive fields ever in the two categories.

There are several contenders for overall victory in the car category, beginning with twice Dakar winner and five-time World Rally-Raid Cup champion, Jean-Louis Schlesser who makes his SWR debut with the announced intention of stepping on to the top step of the podium. But to do so, the Frenchman, in his emblematic blue buggy, will have to defeat the four-wheel drive entrants, including the very promising Argentinean Lucio Alvarez in a Toyota, who, with the same car finished fifth on the this year’s Dakar.

There will also be some « new » machines to contend with. Christian Lavieille can’t wait to show the full-potential of the latest Dessoude built Proto 11. German rally-raid veteran Mathias Kahle will take on the Russian deserts with the new SAM-Mercedes prototype, which after testing has been the talk of the all-terrain community.

Benefiting from racing in their native country, local entrants will have an advantage on the extremely varied terrain that they know by heart and should not be overlooked.  Boris Gadasin and Ilya Kuznetsov will lead the Russian contingent, but Miroslav Zapletal from the Czech Republic in his crowd favourite Hummer will be in the mix.

Among the others to keep a close eye on are ‘new comer’ to the sport, but long time WRC and IRC front-runner: Toni Gardemeister. The 37-year old Finn, who is a former Seat, Ford and Suzuki factory driver and took a career best 4th in the 2005 world rally championship, will make his rally-raid debut in the 2012 SWR and could create a surprise on the fast stages run on the steppe…

The battle for the win among the two-wheel cars will be just as exciting. In addition to Jean-Louis Schlesser, the top three finishers in this year’s Dakar; Ronan Chabot, Bernard Errandonea and Thierry Magnaldi are also entered. Three specialists ready to rekindle last January’s fight in the class. And Isabelle Patissier, who is making her Russian debut, shouldn’t be overlooked as well.

Defending truck category winner, Alès Loprais will put his title on the line, but at the wheel of a MAN! Seconded by the always consistent German Franz Echter, the Czech driver should be well armed to take on the mighty Kamaz factory entries, led by 2010 winner, Eduard Nikolaev and fellow Russian Ayrat Mardeev who finished fifth on the 2012 Dakar. Kazak Artur Ardavichus, who finished third overall in Lima in January, will be another to be reckoned with. Depending on how the rally plays out, the Ginaf, Renault and Maz entries could create a few surprises as well…

In other words the seven special stages, designed on a route that is more than 70% new, there could be very little in it between all these exceptional competitors in the battle for the win in the 4th edition of the Silk Way Rally… Media coverage records will also be broken. Daily reports will be aired in 197 countries via 63 channels, including Eurosport, CCTV, SPEED and FOX SPORTS. 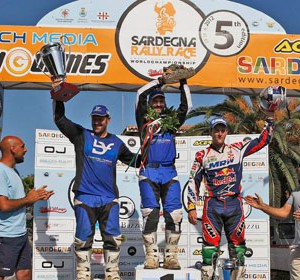 Jordi Viladoms won the fifth edition of the Sardegna Rally Race, and for the first time affix his seal on a test of the World...
Copyright 2011-2016 Rallyraid.net - RISE Network. All Right Reserved.
Back to top