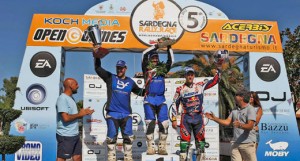 Jordi Viladoms won the fifth edition of the Sardegna Rally Race, and for the first time affix his seal on a test of the World Championship, which the Catalan has participated since 2006. In the “grand final” of the most daring of Bike Rally Village Alessandro Botturi beats Marc Coma, relegating the Spanish Champion, who had won the two previous editions of the Rally, at the third place. It is the first success of the Bordone-Ferrari Racing Team, that will unveil his first Rally Motorbike tomorrow, at Castiglione Fiorentino, during the first night of the Enduro GP of Italy.

The fifth and final stage of the Sardegna Rally Race could not actually be a formality, since the development of competition had left the door open for more than one final scenario. Leaving the criminal asylum of the Arbatax Park this morning, therefore, the last effort of the Sardinia Rally Race has taken the competitive tension to an even higher level. The program was tight: 255 km in total, two special tests relatively short, also tight overall rankings in the top positions, and a stake of great importance and prestige.

The grand finale is to be followed by the ringside. The imperative for Coma is to attack, instead for Viladoms is not to make any mistakes. Botturi received a limited order from the Team board, that simply is not to dare more than the necessary, and to avoid to throw out the second place and ruin everything.

Viladoms carefully sticks to the program. It flows fast on de road book notes when unambiguous, and slows down noticeably when the navigation is more difficult. Behind him Coma attacks and goes to meet the risks of a less careful navigation, the only way to erode the disadvantage. In the first Special Marc makes a navigation error, and the next, the latest, the rear brake failure of his bike frustrates any hope of success. Meanwhile Alessandro Botturi is triggered. At the start of the first Special Test he asked to see the standings, and studied it for a moment. He half closed his eyes and whispered: “I’ll try!” Someone may object: “Jordi Arcarons, the manager, will not be happy.” “Never mind, this is the way I feel.” At the end he’s right, the Colossus of Lumezzane. Botturi Special wins the first Special Test and reaches Marc Coma, who then exceeds in the second and final Special Test. His delay of a minute and a half of the vigil pulverized, Botturi takes the place of honor on the podium of San Teodoro. For Marc it remains maybe a small satisfaction cbecause of the third place he takes, but for sure the Catalan will be happy because his fifth World Championship title has been assured.

In fourth place, 12 minutes late, there is the 2011World Champion, Helder Rodrigues, and fifth and sixth places went to two Riders that finished in the reverse the order last year: Paolo Ceci and Stephane Peterhansel. But the Sardinia Rally Race also rewards Manuel Lucchese (Junior Under 25 class), Mauro Uslenghi, the best Over 50 and 13th overall, and Andrea Mayer, who won the female category. Lukasz Laskakiec is the winner of the Quad category, and Matteo Graziani wins the Over 450cc Trophy. 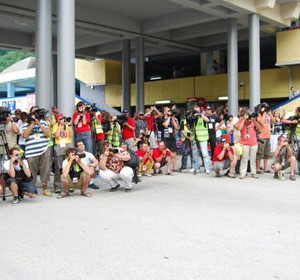 From July 7 – 13, the fourth edition of the international rally-raid, the SILK WAY RALLY, the 130 participants, including...
Copyright 2011-2016 Rallyraid.net - RISE Network. All Right Reserved.
Back to top