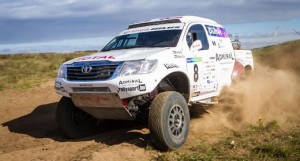 Hungarian driver Erik Korda and Poland’s Szymon Ruta finished a fine third and fourth overall in a demanding Baja Poland, round six of the 2012 FIA World Cup for Cross-Country Rallies, which finished in Szczecin on Sunday.

At the wheel of a pair of Overdrive Toyota Hiluxes, the duo belied their lack of experience with the exciting new Hilux to seal a pair of excellent results with their respective co-drivers, Csaba Fábzán and Sebastien Rozwadowski.

“I am really happy with the result; both crews raced a great race,” said Overdrive team director Jean-Marc Fortin. “Erik and Csaba got faster as the race progressed and Szymon and Sebastian had a good debut in the T1 class. I think with some more seat time they will only get quicker.

“The route was definitely a test for the Hiluxes and the cars performed faultlessly. A big thanks goes out to my team for their hard work during the event and the preparation for the race.” 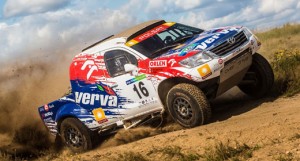 Ruta and Korda began steadily and recorded the eighth and ninth quickest times through the opening super special stage on Friday evening, a timed test that also determined the starting order for the first of two longer stages across military terrain on Saturday. They set the fifth and seventh quickest times through the opening stage, with Vladimir Vasilyev and Miroslav Zapletal vying for the top spot. Muddy conditions prevailed through a demanding third stage on Saturday afternoon and Holowczyc set the fastest time and moved into the outright lead. Korda and Ruta gained further valuable experience with the Overdrive Toyotas and set the fifth and sixth quickest times – the performances pushed the Hungarian and the Pole into fifth and sixth overall at the overnight halt.

Two shorter special stages remained on Sunday around Szczecin and Korda set the fourth quickest time and moved up to a similar position in the overall standings behind Holowczyc, Zapletal and Gadasin – the Hungarian’s cause also helped by the retirement of Vasilyev with engine problems. Ruta belied his lack of experience with the Toyota Hilux to record the sixth quickest time and he also climbed to fifth overall.

Korda was in superb form through the final stage and the Hungarian set the second quickest time. With Gadasin troubled with transmission problems, Korda also climbed into the final podium position, as Ruta finished his first event with the Overdrive team in fourth position. 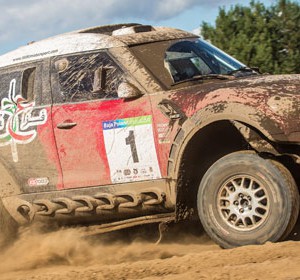