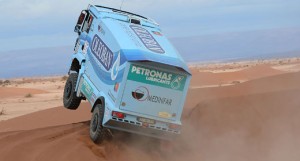 At the last stage of the Moroccan Rally, the team was third in its category and, with this result, confirmed the podium place to which it had become entitled at the end of the fourth stage. On the fifth day of the race, the team confirmed the position when it was more than two hours faster than the one immediately behind, the Italian Claudio Bellina.

In this race, our driver showed how persevering she is, and she reached her main objective, which was to get to the podium place she so much aspired to: “I’m proud to have finished yet another race and mostly to have positioned our MAN in third place, before all those prototypes. Although we couldn’t really have done better in the truck category, I feel nonetheless sorry not to have made the truck auto category top ten. However, for that it would have been necessary to be a little faster on sand”, disclosed Elisabete Jacinto after crossing the finishing line.

On reaching Zagora, the Portuguese race driver made a general survey of the competition: “Fortunately everything went on well, and we are very happy. Of course this good classification is due to my team’s excellent work. With expertise and imagination, the assistance solved all the problems which we had to face, and José Marques, though having suffered some moments of anxiety, did an excellent navigation. A word also about Marco Cochinho, who has been doing a brilliant maintenance work, which has enabled us to finish all the races. Now we are heading home with an enormous list of tasks to complete before Africa Eco Race. This is also a rally which is supposed to have a high competitive level, and we want to be well prepared”, she concluded.

For Jorge Gil, the team coordinator, the balance of this Moroccan Rally is positive too: “We reached our main objective, and this was our third podium this year. It was a difficult race and it required a thorough management on our part. However, the team was at its best level, and we couldn’t have been happier with the result”, he stressed.

Elisabete Jacinto and Team Oleoban/MAN Portugal will be back to competitions at the end of December, when Africa Eco Race 2013 shall start. 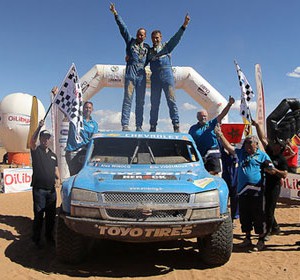 The final stage of the the OiLibia Rally of Morocco celebrated two giants of the rally world. On the podium, are Cyril Despres...
Copyright 2011-2016 Rallyraid.net - RISE Network. All Right Reserved.
Back to top