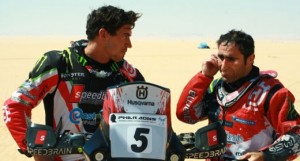 The Husqvarna Rallye Team by Speedbrain dominated the third stage of the Pharaons Rally, the longest and most difficult of this edition of the African rally, with 426km (266 miles) of special test and a total run of 582 km from Tibniya to Abu Mingar. As in the first stage, the team marked up another double, Barreda taking the honours and Goncalves coming in second, both helped on by the Husqvarna TE449RR by Speedbrain.

The leading rivals were left trailing behind, the Pole Przygonski taking third more than seven minutes behind Barreda and Viladoms in fifth, some twenty-eight minutes off. Barreda now holds a firm grip on the overall standings with his team-mate Goncalves retaking second place. Tomorrow looks forward to 463km of special test.

Joan Barreda: “I’m really pleased with the way I rode today. I managed to be really quick as well as navigating the Road Book well. Now I’ve got a good advantage that I mean to hold on to until the end of the rally.”

Paulo Goncalves: “Joan really rode hard and I kept behind him for the whole of the stage. I’m happy with the second place. Today’s stage had been really difficult  and our TE449RR was up to the job.”

Wolfgang Fischer- Team Manager: “Great result for the team; first and second place and a good advantage over the rivals. They set the race’s pace and Joan navigated very well. They proved themselves to be worthy even on the hardest and most treacherous stretches.” 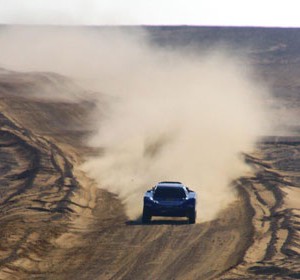 The battery problem that put Jean-Louis Schlesser on the back foot on Day 1 meant that basically his options were limited...
Copyright 2011-2016 Rallyraid.net - RISE Network. All Right Reserved.
Back to top