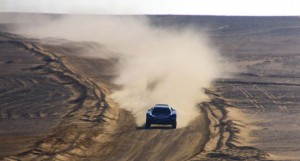 The battery problem that put Jean-Louis Schlesser on the back foot on Day 1 meant that basically his options were limited to going flat out for the rest of the rally. Yesterday’s leg saw him do just that, taking a huge 16 minutes back from World Cup rival Kalifa Al-Mutaiwei… Today he needed to do the same again and the mammoth 426km test, which as well as being the longest of the rally is also the toughest would only be won by the best of the best…

On top of a dune about 20km in from the finish we strained our eyes against the horizon to see who was making the cloud of dust. A flash as the sun caught the windscreen and then slowly we saw that the colour of the car was red, not blue… Al-Mutaiwei was about 3 minutes ahead on the track of Schlesser who was still pushing to the limit as he came passed us.

The desolate landscape was full of strange sand-blasted rock formations but we only had a few minutes to marvel at them before the next car came, about 15 minutes after the blue Sonangol buggy. It was good to see Boris Gadasin doing well again as a persistent misfire had been hampering him for the last 2 days. With the power of a fully functioning V8 under his right foot he showed what he can do.

We’re in a different campsite tonight, a dusty, windswept corner of the great Western Desert but it’s not a hardship for everyone. Once he’d finished his long massage I asked Kalifa Al-Mutaiwei how his day went. “It was OK for us,” he said reclining on his massage table like a prince. “It only took us 9 minutes to catch Jean-Louis Schlesser and we enjoyed the stage. Now we have a 15 minute lead which I am very confident about and it is important for us to go to Dakar with the
title, especially after being away from motorsport for 8 years.”

Schlesser on the other hand looked a bit more flustered… and red in the face. “It was hot in the car today,” he shrugged. “Maybe I caught the sun through the window! Today wasn’t so good as we got stuck in a bad place. In the dunes we came down one side but then couldn’t get up the other side. We can’t risk using reverse gear because of the problem we have with it so took a spare wheel off and jacked up the front. We lost about 15 minutes with this but then drove as fast as we
could and finished 9 minutes behind.”

Listening to his translator tell him what he can expect on tomorrow’s stage was Russia’s G-Force team leader Boris Gadasin. “Today was actually easier than we were expecting,” he said. “And it was also very nice with lots of variation. There were many dunes, some soft sand, rocks and places that were really bumpy. It’s good that we fixed the engine as it is a problem that we have had since Baja Poland… and so now we can concentrate on preparing for the Dakar!”

Dropping from his fine 2nd place was Patrick Sireyjol in his SMG buggy. He lost time near the start with a problem with the oil cooler and when he set off again found a Kazakhstani Bowler Wildcat stuck on the other side of a dune. “You’re supposed to warn people if you are stuck just out of view,” he said as he pointed to the scratches of light blue paint all down the side.

With a smile as I was heading to the press tent was Costel Casuneanu. “We were following Miroslav Zapletal for about 45km but last year wekilled his BMW when we found it over a dune, so we were thinking about that! But we did quite good today, the only problem was a heavy landing on the nose of the car and we got stuck a couple of times. But as I said before, we are here to finish, so 7th fastest is perfectly acceptable.”

Tomorrow will be two separate stages looping around from the bivouac, the first one 215km and the second 248km. The host of the briefing has just said that if today was the rally’s hardest then tomorrow will be the most beautiful. There is no long road section so it should be an earlier finish for me, so I’ll go and find some of the midfield runners who have come from far and wide… Right now I am going to climb the biggest mound of sand I can find to call my dear girlfriend. Missing you Valentina! X 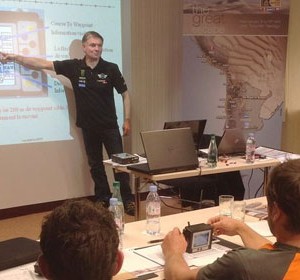 Finishing the Dakar on a first attempt is a hard task but one that can be achieved. In order to give themselves the best...
Copyright 2011-2016 Rallyraid.net - RISE Network. All Right Reserved.
Back to top