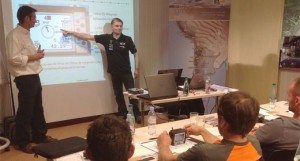 Finishing the Dakar on a first attempt is a hard task but one that can be achieved. In order to give themselves the best chances of success, competitors from eight countries made the journey to the Dakar Europe training course. The South Americans will have their turn on 10th November in Buenos Aires.

A studious atmosphere, a lecture-like ambience and advice dispensed to a hushed silence were the watchwords. Last Friday at Issy-les-Moulineaux, the Dakar bivouacs seemed a long way away. However, this was a decisive day for the 27 riders and drivers new to the rally, who were invited to take part in the Dakar Europe training course, where they were able to pick up plenty of advice before their first taste of sand from 5th January next year. Welcomed by Etienne Lavigne and David Castera, the future adventurers followed a day’s worth of training sessions devoted to how to prepare physically, how to use the safety equipment or even how to read the road-book and how to navigate in general. In this domain, they were able to take advantage of the advice and experience of Michel Périn, one of the most decorated co-pilots on the rally, with three victories in the 1990’s as well as a 2nd place last year alongside Nani Roma.

Amongst the trainees, Romain Souvignet was especially attentive to the detailed explanations provided by Michel Périn: “I’m not very used to orienteering, so it’s very reassuring to hear these small hints and tips on how to navigate. For example, for preparing the road-book every day, I discovered that using the highlighter properly will be vital for enjoying a good day on the bike”. Although Romain is not making a leap into the unknown after having been a regular on the bivouac last year to provide assistance to two of his friends, he once again measured the importance of certain details in being able to rise to his challenge. “The doctor who spoke to us emphasised the need to remain concentrated and to be efficient, even after finishing a day’s riding. To recover properly, you need to make sure you shower, eat and go to bed quickly. I’m going to try and follow that advice”. 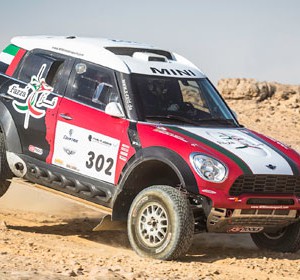 Dubai’s Khalifa Al-Mutaiwei and German co-driver Andreas Schulz were on track to extend their advantage over arch rival...
Copyright 2011-2016 Rallyraid.net - RISE Network. All Right Reserved.
Back to top